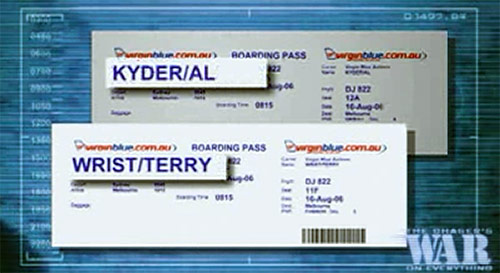 Only in Australia, can you make terrorist jokes in public with the taxpayers’ money and get away with it.

A late night comedy show on a public TV station called “The Chaser’s War on Everything” recently hosted a prank on a local domestic airline concerning the recent airline terrorism scares. They booked two e-tickets under the suspicious names of “Al Kyder” and “Terry Wrist” (which sounds surprisingly like Al Qaeda and Terrorist for those slow people) and checked-in to board. Of course, they wanted the names read out over the speakers so they failed to board the plane. The look on the women reading the names is priceless.

Adapted from The Age’s article.