Apple now has two solutions for the living room entertainment experience, the Mac Mini and codename iTV. Microsoft also has two, the Media Center and Media Center Extender. Each has its own advantages and disadvantages. Let’s take a look at each through a list, bet you’ve never seen a list on a blog before.

The following blog post is based on preliminary information about an unreleased product. Specifications may change in the future. So if the iTV thing turns out to be different, don’t look at me.

The Mac Mini is a small-form desktop computer designed to satisfy the low-budget buyers of personal computers. It ships with Front Row as well as the Apple Remote. It is priced around the $600 mark. 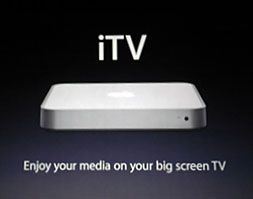 iTV is a project in development slated to release in the first quarter of 2007. The form factor resembles a Mac Mini but is thinner is height. It is designed to play content from an iTunes-enabled PC onto a television.

So what does this all mean? Well it means nothing is perfect. Every solution offers something different that is suited towards different markets, but there is a consistent quality in terms of experience throughout all four products. If you already own an abundance of content on existing computers, then the Media Center Extender or iTV solution is for you. If you want to use a PC exclusively for the media center, then the Windows Media Center and Mac Mini is better suited.