I don’t know how columns like this gets published, but Steven J. Vaughan-Nichols writes, how much abuse will you take from Microsoft? He claims users and businesses will be kicked in the face an unlimited number of times before they realize that they don’t have to stay in the abusive Microsoft relationship. 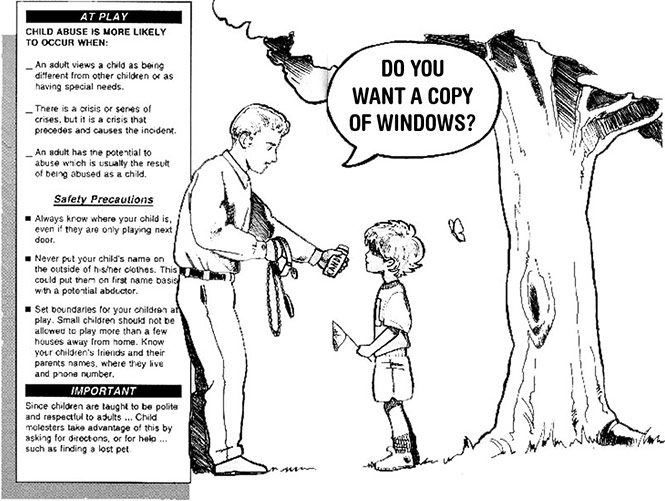 Take, for example, Internet Explorer. In the latest bad news, the newest zero-day flaw in the Internet Explorer implementation of the Vector Markup Language has opened up a gaping wound in Windows. Through that wound, every kind of garbage imaginable — bots, Trojan down-loaders, spyware, rootkits — are pouring into Windows systems.

Take, for example, the United States border. In the latest bad news, the newest zero-day flaw in the anti-climbing implementation of the border fencing has opened up a gaping wound in the United States. Through that wound, every kind of immigrant imaginable — Mexicans, Mexicans and other Mexicans — are pouring into the United States.

You think you’re safe because you do all the right things in patching your systems? Think again, this hole exists even in fully-patched version of Windows XP SP2 running IE 6. Right now, this very moment, if you go to the wrong site with IE 6, your system is going to get as sick as a dog and You Can’t Do Anything About It.

Sick dogs usually go to the VET. But I see where this is going.

Well, actually, there is one thing you could do. You could switch from vermin-ridden Windows to a desktop Linux. For businesses, I recommend SLED (SUSE Linux Enterprise Desktop) 10. For home users, Ubuntu 6.06, SimplyMEPIS 6.0, Xandros 4, or Freespire are all excellent choices.

You mean the one thing, only thing, life-saving thing, you can do, is migrate your entire system to another operating system? Whats going to happen to your workflow, documents, settings, applications, communications and customizations? All that because some hacker out there might draw some pretty vectors to inject you with some popup advertisements? What about applying one of the four workarounds? One is even as simple as running a “regsrv” command.

Yes, Firefox has security problems, too. But, you know what? They tend to be fixed fast — and there has never, I repeat, never been a significant Firefox-based malware attack of any kind.

Internet Explorer? It takes forever for some problems to be fixed. Worse still, even when Microsoft “fixes” a problem they sometimes can’t get it right the first time, or even the second time. They finally did get it right the third time… but, of course, it was only after that, that the floodwaters of filth came pouring into the hole the folks from Redmond hadn’t patched.

“Floodwaters of filth…” has such a negative vibe to it. “Sprinkles of god’s life-giving liquid fill the shallow dips hollowed by the gentle workmen in Redmond” would have sounded a whole lot better. Besides that, out of my entire computing lifetime, I have not witnessed one malware that has been installed using exploits. Sure, a lot of people have malware on their Windows computers, but most if not all of them are caused by user stupidity, clicking on cheap mortgage offers and free college degrees.

The only thing I’m sure of about Microsoft is that they believe that there’s a sucker born every minute. So far, it seems that they’re right, as users continue to stand by their shoddy goods, without even seriously considering the competition.

Most people know of alternatives. The Mac OS is on TV pretty frequently, and Linux is always in the news. My parents even asked if I wanted to buy a Mac, even though they don’t know what’s the difference.

And, since Microsoft doesn’t have a strangle-hold on the portable music market, buyers will have the good sense to not give Zune a chance to trap their music in a new Microsoft DRM (digital rights management) prison.

Microsoft doesn’t have any hold, since they don’t have a product in the market yet. But as far as I know, you can put and listen to any MP3 files you want on it. So Jimmy can transfer his entire collection of DRM-less music and even share it to his friends. Jimmy will also be happy knowing the Zune is cheaper than the iPod. Maybe one day, the Linux community can produce their own portable media player, and each user will have to pick their own DRM distribution. I bet the record industry will love that.