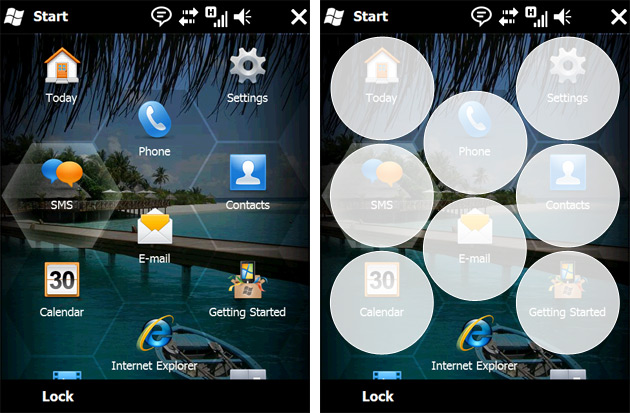 Several weeks ago, some pundits were quick to dismiss Windows Mobile 6.5’s honeycomb menu as a “glorified grid”, an Engadget editorial put it – “a sign that Microsoft has gone out of its way to avoid a grid”, but that’s what happens when misinformed “journalists” try to appear smart. The truth is, the honeycomb from a usability perspective is superior than traditional square grids for a touch interface. Here’s why.

Contrary to popular belief, the tip of human fingers is not squared, but in fact circle-shaped when depressed against a hard surface like a touchscreen. When you’re space-constrained as you are in something like the applications menu – where there’s a fine balance between how many icons can be displayed at one time and how easy it is to hit the icons, large circular hitareas makes it easier for users to touch the desired icons and avoid accidentally hitting nearby icons.

Whilst the example on the right is not perfect (two-half circles does not in this case equal one full circle), the grid takes up 10% more room to display equally sized circles than the hexagonal arrangement.

One perspective to appreciate this figure is the fact for a grid to achieve the same item-area density, it would have to reduce the size of each item by 10%, thus also reducing its usability.

So the next time you see something new and shiny from Microsoft, before you dismiss it for a poor clone of an existing product or idea, just remember there might be a possibility, the slightest possibility, that some thought and reasoning is behind the decision.