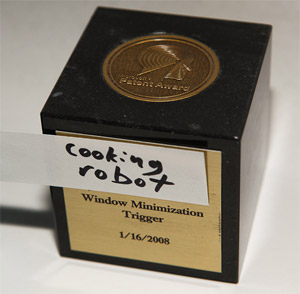 In typical Reddit fashion, earlier today on a thread about Windows 7’s Aero Shake feature and its inventor suddenly appeared out of nowhere.

Ex-Microsoft employee nicknamed “cookingrobot” proudly showed off a photo of his patent cube as proof and accepted questions from the community.

The responses reveals some pretty interesting insight into its development, For example, the evolution of the feature.

Kanilas: Did you have alternative triggers you tried out? Instead of shaking the window, what were they?

cookingrobot: The opposite actually.. we started with an entirely different prototype where you would rub your mouse back and forth on a window to see it even if it was covered. It was called aladdin, like the lamp. The idea was if you wanted to quickly take a peek at a window without switching to it, you could just sort of, rub it, and it would fade to the front. It turned out it was too tiring to have to keep rubbing it, so we scrapped that feature. But there was something fun about the shake.. so we kept prototyping.

And also how they fought to keep the feature in the product.

jn023d: Neat! What’s your job title? Do you get residuals ever time we shake a window? According to a patent application, weren’t there other inventors too?

cookingrobot: It was a team effort, and a bunch of us are on the patent. Devs, designers, and so on. Possibly the most influential person was the usability researcher who captured footage of people laughing when they first tried it. This was invaluable ammo to help us defend the feature from being cut. Seeing people laughing out loud was unexpected, but very very good. I actually just left MS to do a startup, but I was a program manager when I was there.

As always, it’s a treat to see and hear from the real people behind the features of Microsoft products especially in an informal setting like Reddit. According to his comments, he left Microsoft earlier this year to start an online shopping startup, www.shopobot.com.