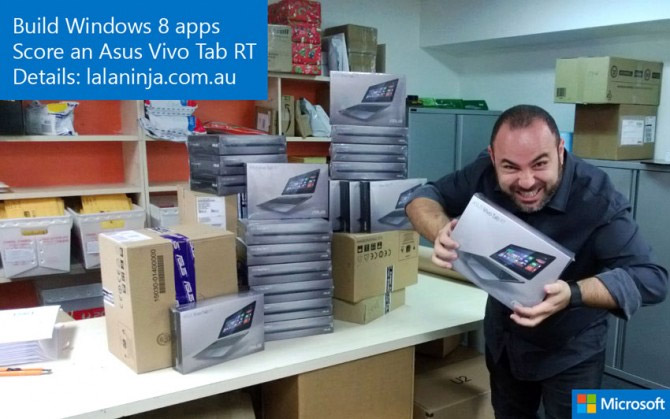 Microsoft Australia today announced a “December of Apps Developer Challenge” on its La La Ninja developer community website. Developers have the chance to win one of 40 Asus Vivo Tab RT tablets. Although the competition seems to make a great Christmas present, it’s unfortunate Microsoft is once again promoting quantity over quality for an app development competition.

Like some of the Windows Phone app competitions before it hosted in Australia and around the world, Microsoft is once again incentivising app developers prioritize quantity and speed, over what I’d argue is the hallmark of Apple’s app ecosystems, quality.

Since some blogs and even Microsoft evangelists love to spell out the large and growing number of apps in the Windows Store, peeking at a majority of the new submissions on MetroStore leaves much to be desired. (Seriously, some of the apps have the default template cross icon.)

Admittedly this is a problem that affects all app ecosystems, I just think it’s misguided that Microsoft’s developer evangelists are actively promoting this practice with prize incentives.

At a rate of one app per week with absolutely no criteria or judgement of quality factors such as functionality, usefulness and design, the addition of the first come first serve clause makes this pretty much a race to the bottom.

Well…, David, Winston and I will be working on many updates to MetroTwit for Windows 8, but we’ll just have to wish for an Asus Vivo Tab RT under our Christmas trees.

Update: On a serious note, Microsoft knows how to run and has run quality-based competitions. Award winners by people and judge’s votes, by ratings or by downloads.