The house I live in isn’t very smart, there’s no color-changing light bulbs, no intelligent assistance speaker and no internet-connected thermostat.

In late April, Elgato launched the Eve Energy smart power switch in Australia alongside an existing set of Eve Homekit devices. I got a chance to try out the Energy switch, Room indoor sensor and Door & Window contact sensor to see if you can teach an old house new tricks. 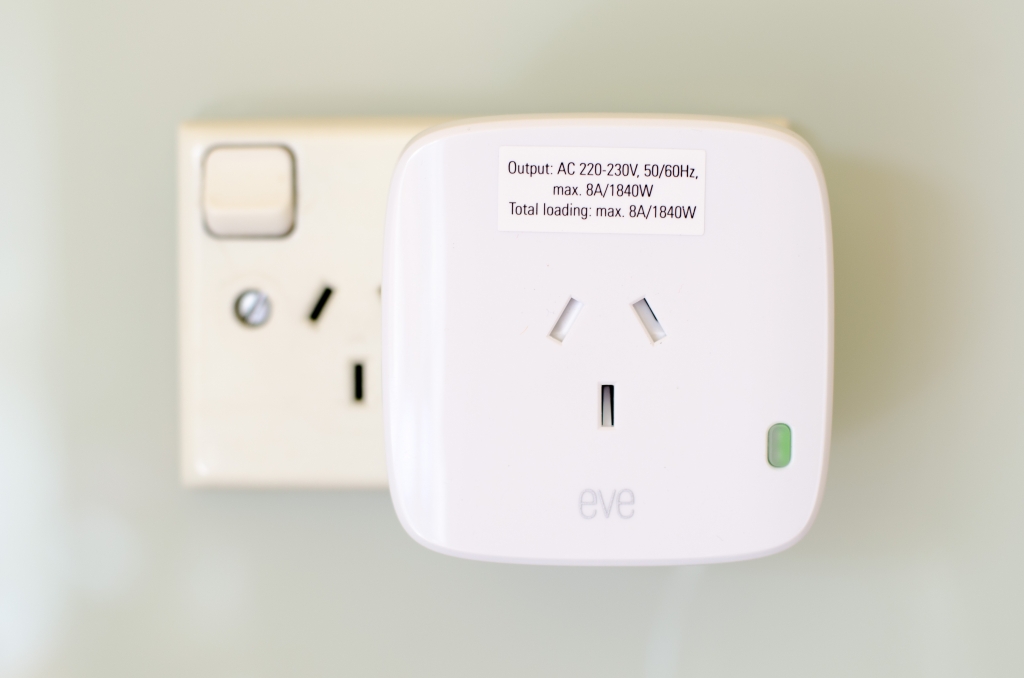 The Eve Energy is a remote-controllable switch and power meter that sits between a plug and the wall socket. It has been available in the US, EU and UK for a while now and an Australian version was recently made available to fit the Australian Type I socket.

Setting up the Eve Energy was quite a breeze, as I would suspect most HomeKit devices. It shows up when you’re near it, you scan an unique code on its side and you’re done. After it’s been set up, it will show up in the Apple “Home” app as a simple toggleable on/off icon. You’ll have to download and install the custom “Eve” app to access more detailed information.

As I’m anticipating installing a Tesla Powerwall 2 to extend my existing solar power system, I’ve always been keen to understand the energy usage and patterns inside the home. The Eve Energy makes it quite easily to see not only real-time usage but also historical usage and patterns over time. 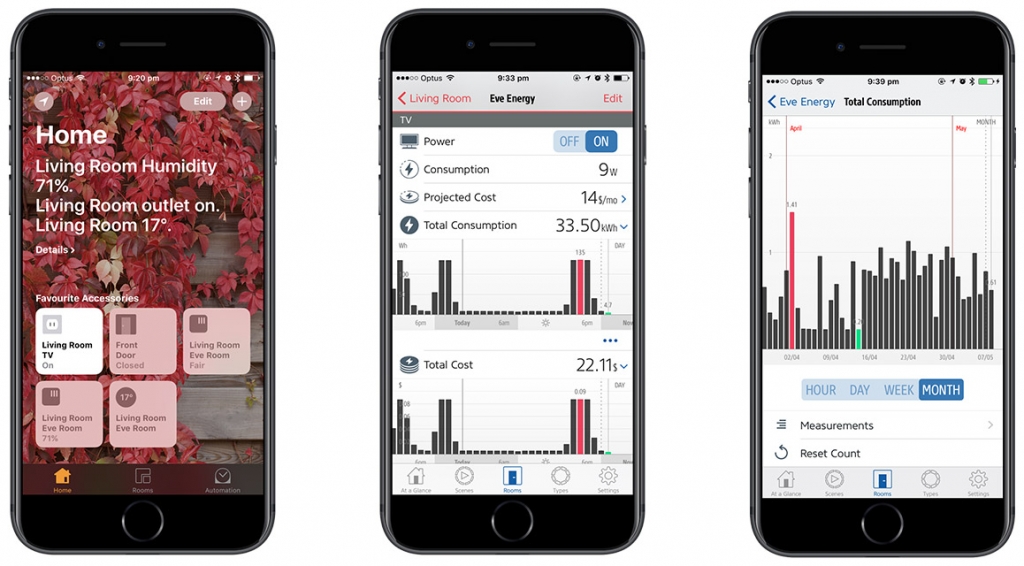 It was interesting to know the home entertainment system (TV + Apple TV + Sat receiver + Bluetooth speaker) used 9Wh in standby and around 130W in use. The app has a built in cost calculator using the market rate of electricity. The TV costs an average $0.70 a day to run.

I was pleasantly surprised at how responsive the Eve Energy is to commands. I took a video at just how quickly the switch turns on and off in response to toggling it in the Home app, at most 2 seconds and usually a second.

What I found troubling is that the bulky size of the unit means that for a typical Australian duo wall socket, it blocks all usability of the other port which is a bit of a shame. I worked-around the problem with a power board but it would have been nice if it protruded a bit more outwards so another plug can fit underneath it in a way. 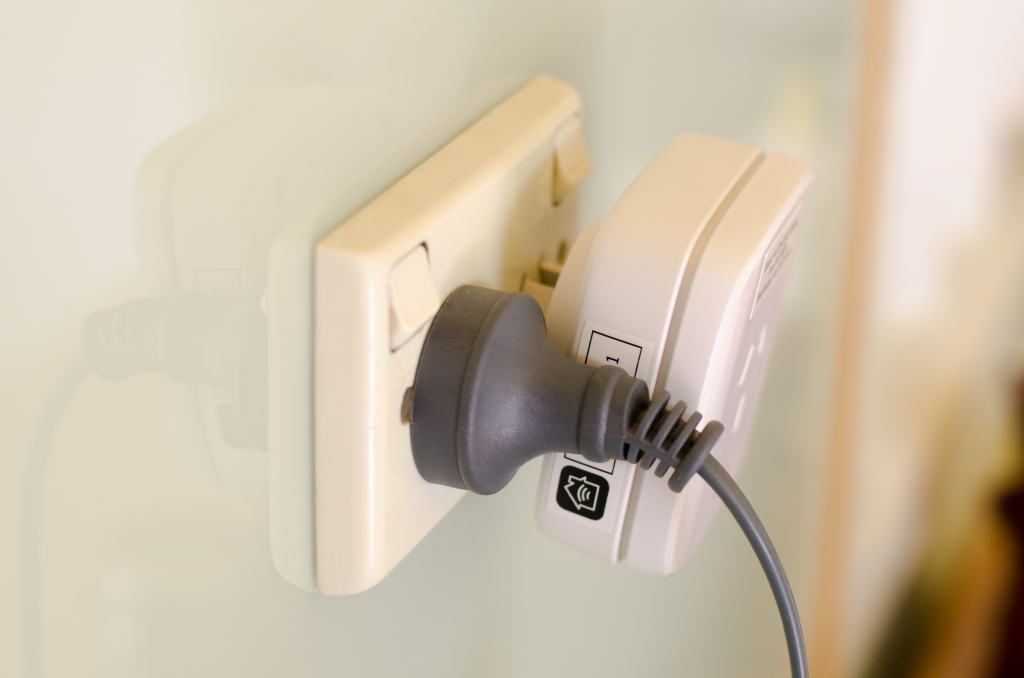 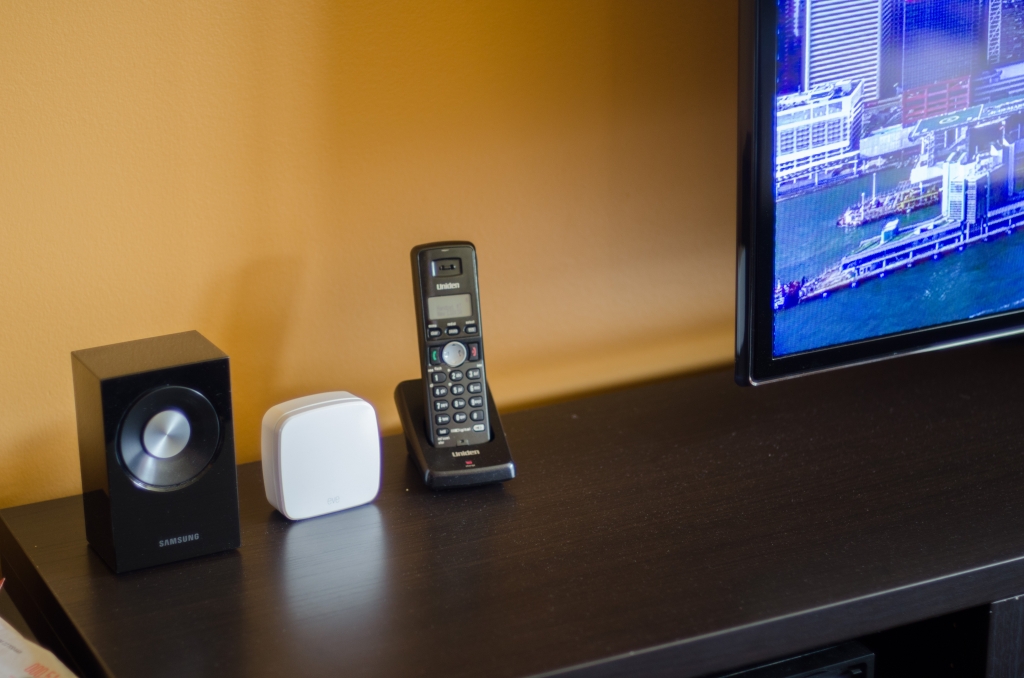 The Eve Room is a standalone temperature, humidity and air quality sensor for indoors. It too was a breeze to set up with just two AA batteries. The compact puck size makes it quite convenient and elegant to place in most locations around the home.

Once up and running, the Room collects data at 10 minute intervals. While tempreture and humidity are self explanatory, the “air quality” sensor is actually a volatile organic compounds (VOC) sensor that measures gases associated with bad air quality stemming from furniture, human breathing, household supplies, chemicals and plastics.

While the Room does not specifically measure CO2 (so it can’t be used to prevent carbon monoxide poisoning), there is some evidence that excessive VOCs cause irritations and “sick building syndrome”.

The Eve app makes it possible to see all three metrics over time. It was particularly interesting for me to see the air quality degenerating every evening as all the doors and windows are closed without much circulation. 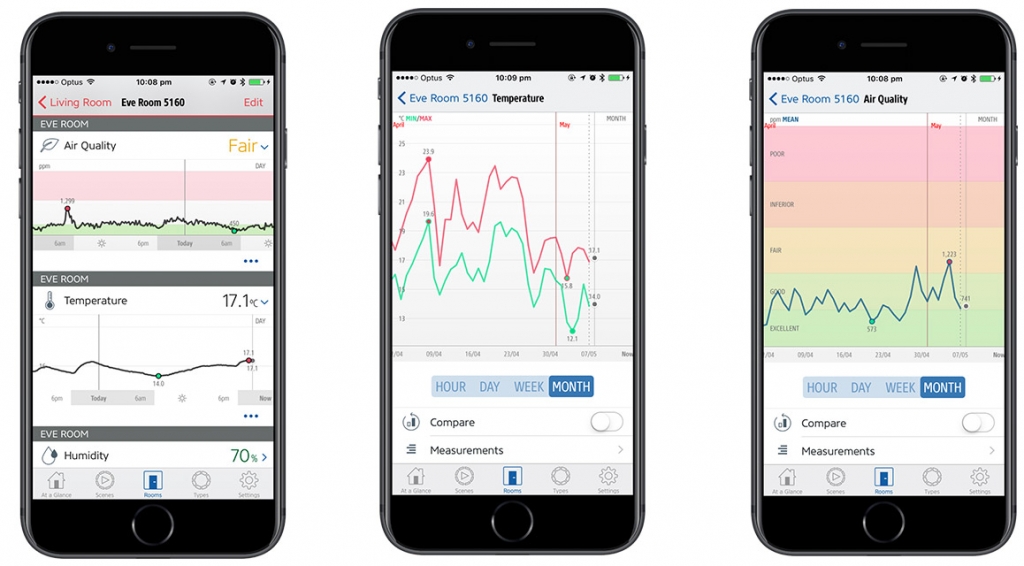 Unfortunately it’s not possible to set up any alerts or triggers on the information such a warning if the air quality exceeds any dangerous threshold which would have been a nice reminder to open a window or something. 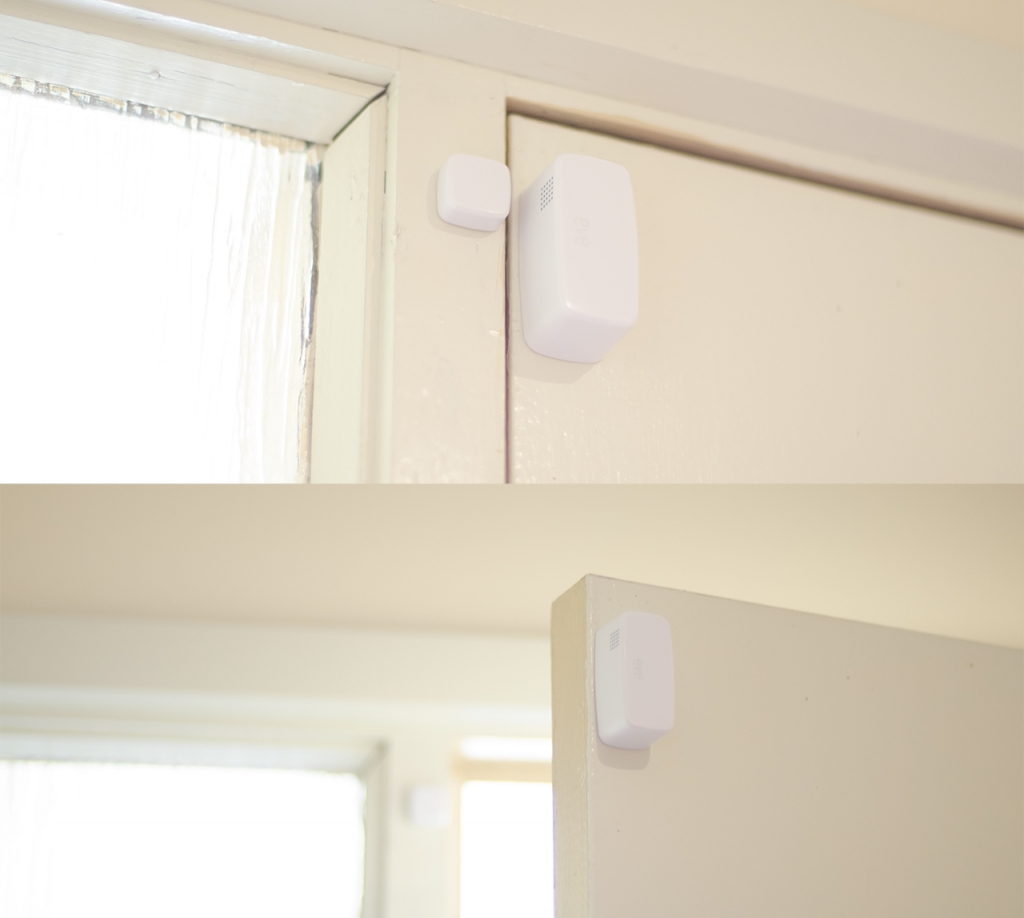 Last and perhaps the least in terms of functionality is the Eve Door & Window sensor. It’s a simple two-piece magnetic switch that senses when it is closed (near contact) or open. And as the name suggests, it can be attached to doors and windows.

Like the other devices, this was once again super easy to set up in HomeKit, pop in the battery, stick on the door frame and go. The accuracy is very good even if the sensors aren’t perfectly aligned or close together. The wireless range is also remarkable since my Apple TV is at least 10 meters away and it sends updates in less than a few seconds.

Besides being able to see if the door is open or closed at any time, you can set the Home app to send you a notification every time the door was opened and closed (which is thankfully off by default). Unfortunately the technology doesn’t yet exist to actually open or close the door at the tap of a button. 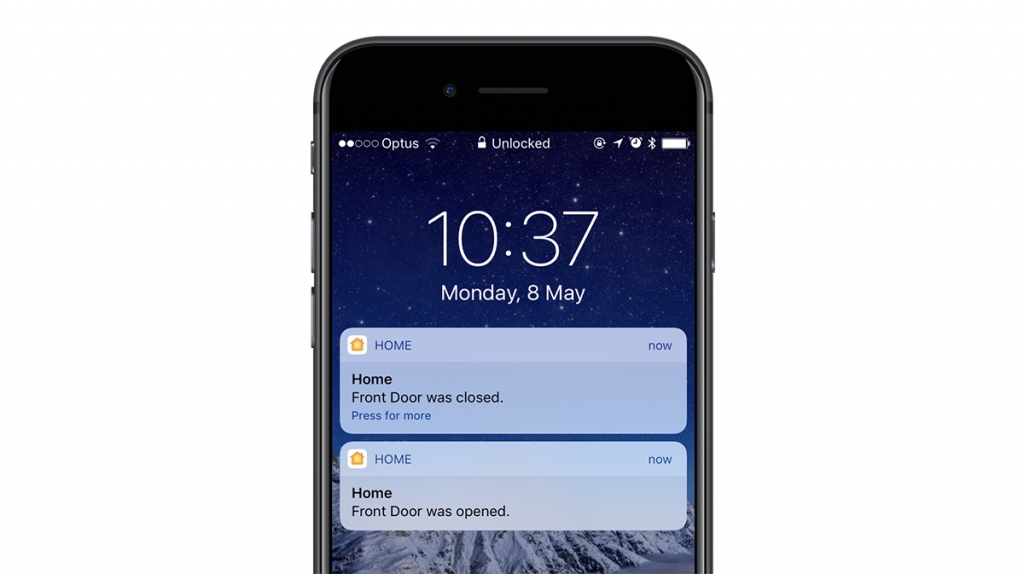 Although I have personally not found any good use cases for the door sensor, I can imagine the notifications being useful for parents who want to make sure kids are home at a certain time or setting up an automated action when the door opens to turn on some smart lights automatically. 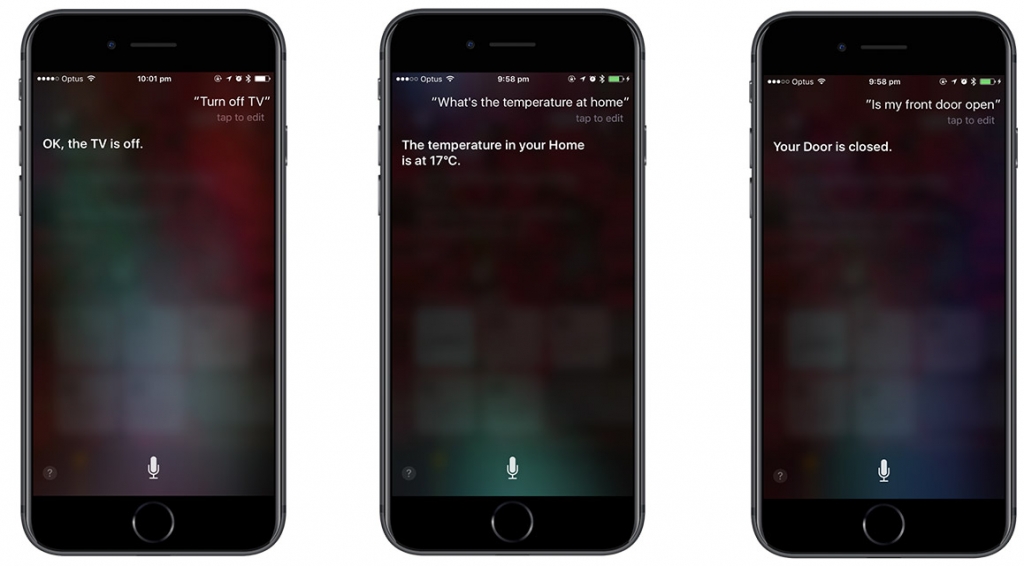 The Elgato Eve suite of devices are super easy to set up and work exactly as they intended to. At A$85 a pop for the Eve Energy smart switch, it’s a bit pricey to pop one on every socket but it’s a pretty affordable smart power meter to understand energy usage around the home.

Unfortunately to do some more exciting automation such as turning on/off lights when I enter or leave the home or heating up the house when I’m about to come home, I would need a lot more HomeKit-enabled gear such as power switches, light/light switches, locks and thermostat.

For now, my house is just starting kindergarten.

Disclosure: Elgato provided the Eve devices for free as part of the review.