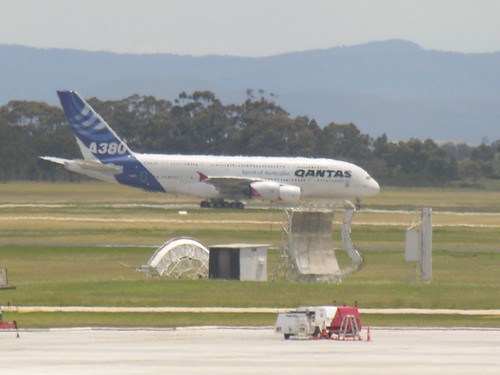 The Airbus A380 commerical passenger jet today arrived at Tullarmarine (Melbourne) Airport on 12:30PM today as part of its promotional tour around the world.

First impressions were the plane isn’t as big as people make it out to be. Sure it’s larger, but its not the enormous giant some people describe. Compared to a 747, it looks fatter and taller. However, its still technically amazing.

The views weren’t that great. The never-opened-after-Sept-11 observation deck at the airport filled up before I even arrived, and many people missed out. Because of the landing direction at the time, no one could see the plane until it had already landed and was taxing towards the docking station. Most of the time it was blocked by the massive two storey docking station that was being built.

Anyway, it still signifies history in some respects and I’ve taken plenty of photos and uploaded quite a handful to show.