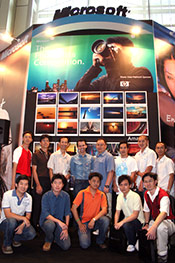 If Microsoft is ever in need of photography talents for wallpapers in future releases of Windows, they now have quite a list spanning from Kuwait to Singapore.

Microsoft Singapore recently ran a “PhotoVista” competition from last December to January to find unique photos vistas of Singapore to be used as wallpapers. It attracted over 2,200 entries in under 60 days within the two categories of amateur and youth photography for under-18s.

The rules of the event stated entrants must be a permanent resident of Singapore and their submissions must be a scenery of Singapore, which gives the competition more authenticity to reflect the artistic visions of Singaporeans and the beauty of the Singapore landscape. The 30 from winners (15 from each category) received prizes ranging from S$3000 (US$2000) computers to S$1500 (US$1000) software packs.

The winners were recently announced at the ITShow in Singapore from March 8 to 11th. They were hand-picked by a panel of independent photographers including Andy Wong, Ken Seet and Ming. A few of those winners were notably users on the popular amateur arts website, DeviantArt.

Here is my pick from the best of the best, links to the highest-resolution download of 1600×1200.

Microsoft should also be commended for respecting the work of amateurs by agreeing to a non-perpetual license, giving Microsoft only exclusive rights until December 2008.