I can’t believe I’m saying this, but an advertisement on MSN.com just blew my mind. I think what Microsoft has done here can be regarded as revolutionary in the market of internet advertising and could spark a new wave of interactive ads on the internet.

Let me show you what happens if you visit MSN.com today.

If you don’t have Quicktime or somehow didn’t understand the video, what you have here is the MSN website sitting inside a virtual Office Word document. The page is styled to look exactly like the Office Word 2007 interface, with everything from the Ribbon Fluent toolbar to the blue page background. Whilst most parts are not interactive, you get a pretty good sense of the interface. Suddenly, this whole page in essence becomes part of the ad, but that’s not the half of it.

The revolutionary part is how you interact with this ad that blows everything else out of the waters. The feature of Office 2007 this ad portrays is Live Preview – the ability to see style changes on documents before making a choice. What might seem like a simple idea is actually very hard to communicate and demonstrate. The only way to show how powerful such a feature is usually involves allowing the user to try such a feature. Why not let them experiment with something that’s in-front of them right now?

This ad does exactly that. With some fancy Flash scripting, you can actually modify certain parts of the MSN.com website as if you were editing a Word document. 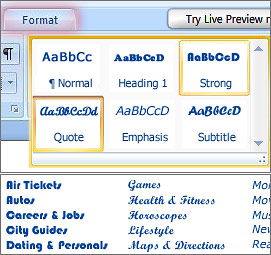 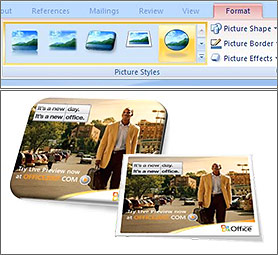 Here is what the MSN team had to say about this ad on their “Inside MSN” page.

What happened is that MSN is trying out a novel form of advertising.

During one 24-hour period, MSN embarks on its initial foray into an interactive ad experience that enables users to preview and manipulate the fonts and pictures on the MSN.com homepage just like products in the new Microsoft Office suite, such as Word and PowerPoint.

The goal is to make it more than just interesting or tolerable, but engaging.

This effort is tied to an April advertising campaign that provides Microsoft a twofold opportunity: promoting a major software upgrade; and allowing MSN’s advertising team a new level of creativity, complexity and interactivity with an in-the-family advertiser.

At the brainstorming stage, the digital advertising group that focuses on branded entertainment and experiences landed on this idea: What if MSN was inside Microsoft Office Word for the day?

I really think Microsoft hit the nail on the head with this. It’s creative, smart and engaging. They’ve given the right amount of control to users, just enough to have fun, but not enough to wreck havok. Allowing users to even opt-out of the experience is admirable. Recognizing the problems with traditional advertising, trying to do something about it and taking risks experimenting is an effort well worth applauding.