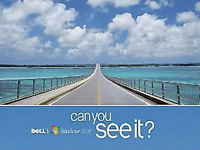 I can see why Vista isn’t selling well with crap like this.

Last month, there was a bit of a backlash against Windows Vista when Dell reintroduced XP back to its product offerings across a range of home and business systems. Even though I strongly advise against gamers upgrading to Vista on their current system, but I don’t quite understand why anyone would want to pay good money for second-rate technology on a brand new system. They’re only going to have to pay even more money in half-a-year’s time when all drivers are well and good. But today, I came across something on Dell.com that might have explained this.

I was actually looking around for the new Ubuntu offerings when I stumbled across this promotional video titled “Vista vs. XP“. I was expecting to see flying-buzzwords and all sorts of hype-generating effects that would have wow-ed the customer into getting Vista as soon as possible, but it turns out to be a piss-poor attempt at explaining what an operating system is with a corny script and unspectacular demos. Have a look at the video to see what I mean.

To say that was disappointing is an over-statement. I can’t imagine any average consumer to want to buy Vista after seeing that. With all $500million dollars poured into marketing Vista, some of Microsoft’s biggest partners still fail to create a campaign even on the borderline of Apple’s Get-a-Mac ads.