What the Oscars or Cannes is for great movies, TED is for great ideas and great technologies. The latest presentation recording uploaded to TED Talks this week also happens to be a Microsoft one from March 2007. Stephen Lawler, general manager of the Virtual Earth team gave a sneak peek into what goes on behind the silk-screen doors at the labs.

Before you click play on the video below, I want to give you a heads up on the boring bits before you fall right asleep. Unfortunately for the first whole 2 minutes of the presentation, Stephen is in marketing-mode, explaining much of what we already know about Virtual Earth and common sense – more computing power, better experiences. If you’re short on time, you want to start at about 2:10, where it’s all ‘insider peeks’ from then on.

Where Stephen really kicks it up a notch is from 4:20, showing off how they translate images from a moving vehicle into 3D models without any user input whatsoever. Building 3D models with simply sequential photographs from a car, not lasers, not scanners, pure digital pixels is just mind-blowing. And not for the buildings on the side of the road, I can see models constructed way out into the distance. 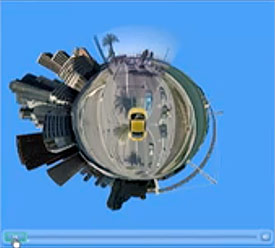 What’s “cute view” you might ask? I’m sure the technical name is something much more professional, but it’s what I’m going to call it. Demoed at approximately 5:05, he loads up a video showcasing a new method of browsing Virtual Earth. It uses the same street imagery and 3D model data, but transforms it into a spherical view where the land is represented by a sphere and you are in the center. Buildings are shown as exaggerated objects that fly out into space. Kind of like those cartoons where a building is exaggerated so high, it extrudes out of the atmosphere and into space. A very fun and ‘cute’ alternative.

I’m not exactly sure what exactly is his last demo about, but it has to do with 3D models and the birds-eye imagery they have. From what I can understand, they can generate some neat composites that takes the best features of each and generates something much better looking.

It just goes to show Virtual Earth is not dead, and they still have plenty of tricks up its very long and PR-tight sleeve. Just by looking at the number of links on the left (local links on his own computer, I checked), there are still a lot of prototypes and demonstrations yet to be shown publically. Hopefully Stephen will speak again at another conference sooner than later and share some of those other internal nuggets.