An interesting view inside Google as a workplace has surfaced on the net. This could be either a look at the actual reality of Google or just a desperate attempt by Microsoft HR to boost employee morales and keep its employees within the fortress that is Redmond. Either that or a prankster who hates both companies just as much.

The following has been making the rounds on just about every internal email list I belong to in Microsoft. Here it is to share a little insight with the rest of the world. Microsoft is an amazingly transparent company. Google is not. Any peek is a good peek.

An anonymous Microsoft employee has posted on a fresh WordPress.com blog of what appears to be the full contents of an email circulating Microsoft’s internal mailing lists. Patriotically enough, he or she wanted to share this with the rest of the world just to show what a great workplace Microsoft is and Google is not. 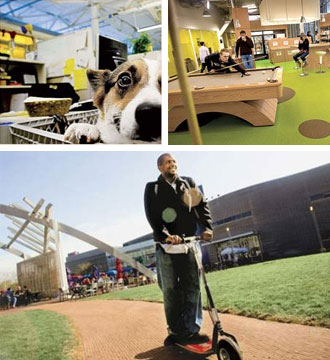 The original email appears to be an interview with an ex-Microsoft employee who left Microsoft for his own startup, only to be later acquired by Google, which he then left to join Microsoft again. Confusing – and slightly ironic. The interviewee answers a series of questions highlighting some of the biggest HR issues such as work environment, career development and work benefits.

The email suggests Microsoft should look into some of Google’s stronger points and adopt them to be more competitive, though as it mentions, this culture is based around a very immature company – most of the employees being in their 20’s – and that it is, in many ways, more like a college campus than a professional business. The shiniest of the stars in all this may just be the free food. Until the Google Fifteen strikes at you.

The interview offers a lot of interesting facts and views (and maybe fiction as well), but since I myself don’t work at Google – nor know anyone that does – I can’t claim any of this is true or false. At any rate, this interview could probably be useful info for most people who work in the IT business on how they could improve their own workplace, so read up and be the judge of it yourself.

Please note: Since Long really isn’t well, I have been given both the great privilege and dubious honor of replacing him. This post is based on a draft he had for it. (Yes, Long has an editor – can you believe it?.) – Oscar

Update: The original interviewee, Geoffrey has voiced his own opinions on the ‘leak’ of his email at his own blog. He insists the views and opinions of Google are of his own, and if you draw even a nano-sized connection between him and Microsoft he will punish you to hell.

I personally think if there is anyone to ‘blame’ for any problems that arise from this matter should be the human resource staff who shared this email in the first place and not the final Microsoft employee who posted it on the internet. I think it’s common sense when something is spread around internally as wildly as this was it will eventually surface. The HR person had the responsibility to keep the details of his interview private and confidential. The anonymous employee only published it because he was proud of his workplace, nothing wrong with that.