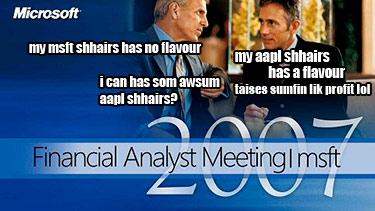 It’s that time of financial year again, Microsoft Show and Tell otherwise known as Financial Analyst Meeting. Starting from 8:30am Pacific Time today, the class of Microsoft Executives will be presenting for 8 compelling hours talking about why investors should sink money into this little company called Microsoft. It might sound like a boring day of numbers and percentages, but it’s actually quite the glitz and glamor.

The usual suspects include Bill Gates – maybe even his last show; Steve Ballmer – investors, investors, investors; Kevin Johnson – Jim Allchin‘s replacement; Robbie Bach – Zune and XBOX guy; Ray Ozzie – off-the-radar CTO; Craig Mundie – Microsoft Research guru; among others. Unfortunately, Steven Sinofsky is not on the list however I suspect he should make a guest appearance to demo something.

So far there is no synopsis of what they will talk about but I will be damned if they pull another ‘future-talk ban‘. Sure they should and will definitely talk about the launch of Vista and Office in the last FY, plus the imminent release of Server 2008 and a bunch of other business softwares, but that’s unlikely to satisfy the hunger of any analyst who’s going to want to know their next strategies inside-out. SP1 anyone? Zune 2? Windows 7 even?

As exciting as it could be, you probably don’t want to call in sick, mute your telephone, buy a big television, pop some popcorn or facepaint yourself blue for this. If you’re not doing much from 8:30am to 5pm, say a full-time job, do check out the live video or audio webcast. 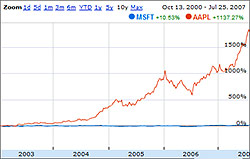 If MSFT shares are any indication, you can bet they will be huffing and puffing with all their might to bring some life back into the chart line that is now pretty much flat. The big bad wolf has to take some big breathes to take before even coming close to that Mt. Everest otherwise known as Apple, Inc shares.

Updates:
7:57 T-minus 3 minutes. The video stream has officially started, however classical waiting music is missing-in-action.
8:37 Started 7 minutes late, not too shabby. Big SEC warning, they will be making forward-looking statements. 🙂
8:41 Wow, how’s that for conference service. If you raise a yellow flag, a technician will actually come and help you with CommNet problems. Wonder what happens if you raise an American flag? Does a band come marching?
8:42 Housekeeping: If you didn’t register your car with reception, you’re so getting a huge fine from Microsoft.
8:45 Bill’s on stage. Talking about next 10 years of software, w00t.
8:48 Enough liveblogging from me, just go read the transcript when it’s available. 😉
8:59 First demo screwup: Surface fails to respond to Bill’s touch at all! Bill: “It’s more exciting when it does something.” Presentation stalls whilst 10 people are fired. Bill looks very, happy.
9:30 Ballmer: If you don’t like change, get out of our stocks! He even mentions UI changes. Big bold bets. Big bold bets. Big bold bets. I’m catching his drift.