Say hello to an orchestra of sound snippet in your instant messenger. The Windows Live Messenger 9.0 beta was released today sporting a handful of new features as already uncovered last week by LiveSide. One feature in particular called Signature Sound is giving users the power to customize the sound their contacts hear when they come online. However as annoying that might sound (pun), what’s more interesting and actually useful is the embedded sound editor used to customize your Signature Sound and every other sound in Messenger. 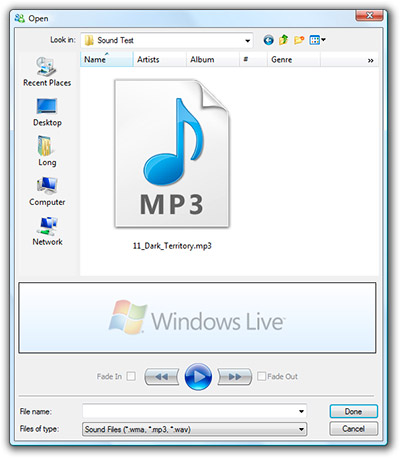 From here, you can select any sound files in WMA, WAV or MP3 format to edit. Once you click on a valid sound file, it will take a few seconds to analyze the file and display a sound wave spectrum for you to edit.

The interface for this editor is similar to any mainstream sound editor applications in which it displays a selection box with a start and end point to clip a segment of an audio track. Messenger restricts all of its sounds to a maximum of 5 seconds which might seem to restrict creativity, but you’ll be thankful when your friends pop online later.

The user can move the left and right boundaries anywhere between the two blue arrows to define a start and end of their sound clip. To move back and forth in the timeline, you simply drag the wave left or right to move the “5-second window”. Alternatively you can also click the rewind or fast-forward buttons to step back or forth in seconds. On top of all that, it’s a nice touch to be able to perfect the clipping by adding a fade in or out. Then it’s as simple as clicking play to preview.

The first thing I thought of when I saw this was how similar it is to the iTunes Ringtone editor for the iPhone. Both of which are dead simple yet unsuspectingly fun and addictive to perfect that perfect clip. Thankfully you don’t have to pay 99cents every time you sign online so it’s a lot more attractive to experiment with.

I’m sure it won’t take very long until someone figures out how to make full-length Signature Sounds which would play the entire Beethoven 9th Symphony every time you signed on. In which case you would want to tick the checkbox to disable Signature Sounds.

Update: On a side note, I understand the WLM 9.0 beta is a private beta and this post is somewhat in the gray, however I do not endorse non-beta users downloading any leaked versions as it is still relatively unstable on the backend and might even compromise the stability of the whole Messenger network.