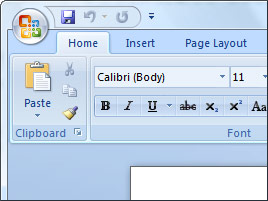 The people who are drafting the new user interface guidelines for Windows 7 plan to build the Ribbon, Jewel and “other new UI concepts” natively into the Windows platform.

Ultimately, they want software developers to avoid the prehistoric Win32 UI framework from no other than Windows 95. Instead, use this new lightweight and high performance markup-based UI framework to build “rich, graphics and animated user interfaces”. The Ribbon and Jewel (button in the top left corner) will be a part of this new framework. It sounds very much like WPF, except native.

Come lead the effort to update the Windows 7 platform with the latest advancements in User Interface design. Bring the Ribbon, Jewel, and other new UI concepts to the Windows platform and work with internal partners and ISVs to update their applications to utilize these hot new UI technologies.

Our mission is to enable the next generation of user interface development on the Windows platform. We will be determining the new Windows user interface guidelines and building a platform that supports it. We’ll eliminate much of the drudgery of Win32 UI development and enable rich, graphical, animated user interface by using markup based UI and a small, high performance, native code runtime.

The UI Platform Team is looking for a senior technical leader to help drive the design and implementation of the new UI framework. Come join our startup team and help us grow it into a powerhouse focused on delivering solutions that developers will love. We offer an environment where you can channel your creativity towards software innovation, work with world-class software professionals and hone your professional skills to grow your career.

Integrating the Ribbon UI into your own applications today is already very possible. Thanks to a royalty-free license and widely available UI controls, the process is quite straightforward. The initial concern was that every developer under the sun would put in a Ribbon because they could, but for the moment it looks as if developers have held back the urge.

By integrating the Ribbon into the Windows platform might provide more consistency compared to the many subtlety-different third-party implementations of Ribbons, but besides that I can’t imagine any other benefits. However, I am intrigued by what they mean by “other new UI concepts”. Perhaps the touch features that will “blow you away”.