Windows SideShow‘s reception in the marketplace since the launch of Windows Vista has been lukewarm at best, but they haven’t given up. Now Microsoft is trying to breathe new life into Windows SideShow by illustrating some interesting applications of the platform to PC gamers.

A research study conducted by Microsoft earlier this year shows gamers are keen on a small Windows SideShow-powered touch-enabled and rotatable widescreen display to the tune of about 6.4-inches attached to the side of a monitor. If that wasn’t enough, it’s also suggested the display be connected via WiFi or Bluetooth so you could place it wherever. Since, Microsoft has ran with the idea showing how such a screen can benefit gamers.

One and perhaps the most obvious implementation of SideShow for a game, illustrated above, is to move the menus and on-screen controls of the game to the SideShow display, freeing up the primary display to show more of the game. This I’m sure captures the interest of RPG and strategy players who might find a third of the screen today dedicated to controls. 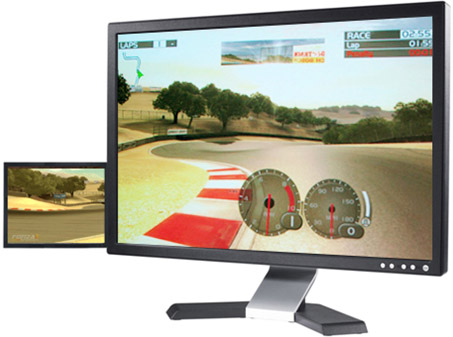 In another scenario, the auxiliary display could also be used to provide a more immersive gaming experience. In this example, the auxiliary display acts like wing-mirror of a racing game, but is suggested could act as an instrument panel for a flight simulator game. Of course prior art is due as Sony first demoed the same concept between a Playstation 3 and Playstation Portable for a racing game, however has since failed to realize. 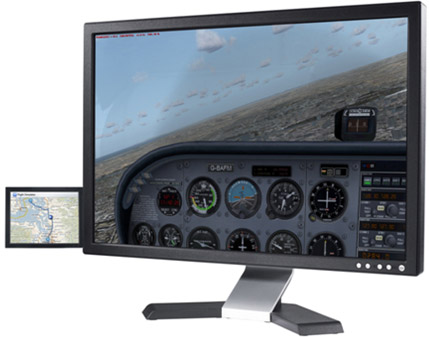 Furthermore, the auxiliary device could display secondary information when a gamer would normally otherwise have to pause the game to display, for example a map in a flight simulator game. Anyone who’s played GTA4 probably comprehends how frustrating it was to pause the game every time you needed to review the large map.

Last but not least, the auxiliary display could also provide information outside of the game but useful to the player, for example walkthroughs, game guides or chatting applications. Of course, like a standard SideShow device, it should also allow you to control music, read emails and check the weather, and we all know how well that caught on.

As an avid PC gamer, this definitely captures my interest but of course is still nothing more than a Photoshop mockup (as seen by the Gamespot watermark). If a hardware vendor can produce such a device for under $100, I think it could sell like hotcakes.