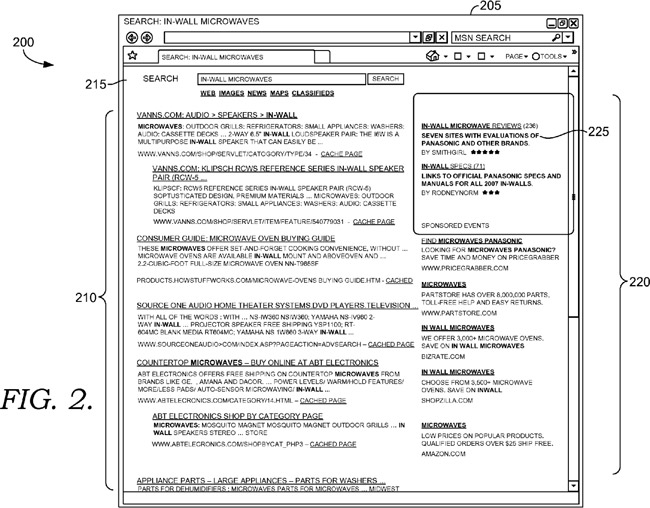 A patent application filed in December of 2007 (not yet granted) by Microsoft reveals an interesting spin on the much touted idea of the human search engine that in theory just might succeed where others have failed by building a real economy around hand-crafted search results.

When thinking of community-powered search engines or “open source” search engines as this patent affectionately mentions, the first thing that probably comes to mind is Mahalo, especially with the new focus on monetary incentives since its relaunch earlier this month. Whilst there are definitely similarities between the two ideas, there is at least one minor but important difference which I think gives Microsoft’s model an edge.

In this particular implementation, the patent suggests users generate targeted search results in the form of lists with numerous relevant web links and even a custom excerpt describing the contents and why its relevant. These lists then appear on the results page of the targeted queries next to the conventional results, thus it is not a search engine that depend entirely on user-generated results, in fact on the opposite end, almost branding such lists as “ads” as suggested in the mockup above.

Next, to motivate users to create high-quality result lists, the patent describes a system of offering monetary incentives for creators who generate “popular” lists, based on volume and/or rankings by other users, tracking clicks and other measurements on the results set.

In order to fuel the economy between creating lists from queries and generating revenues for creators, ad revenues from ads that are shown on websites are used to pay the creators. However, ads are not the only mechanism that may be used to generate revenues. Revenues from a subscription or usage could also be used depending on how the present invention is implemented. The economy provides flexibility by allowing creators to generate popular lists and allowing creators to invest in new entrants into the economy.

Whilst so far everything might sound rather predictable of a community-powered search engine, but the other side of the coin is where it sets this system apart. Instead of a free-for-all system where anyone can create a results list for any topic or query, this patent also describes an economy for targeting queries.

A user […] can create a list targeting a query. The list is sent to servers to be shown to the public whenever the list is accessed. However, a link to the list is [only] shown to the public when [the] creator pays a value or rent. The amount that creator pays depends on the query, which has an assigned value. Regardless of the size of the generated list, [the] creator pays the value or rent commensurate with the assigned value to the query. Higher value queries command higher payments or rents.

This barrier-to-entry to publishing a list is where sets this system apart from other implementations I’ve witnessed. The system is no longer just an opportunity to earn some loose change, but it actually deters lists that are of low-quality and also builds competition between list creators for a limited number of spaces per query. The word “rent” is of particular interest since it suggests that this may be a fee over time.

Furthermore, there may also be very much a risk involved in creating bad lists. For example, incurring a lost if a list is bad or not updated over time.

As embodiments of the present invention describe incentives for [the] creator to generate a good list, embodiments of the present invention deter the creation of bad lists. If a list is not popular, it will not earn income. Over time, a bad list will lose its opportunity to be shown to the public in favor of more popular lists. This can occur even if the creator has initially paid a value or rent to be shown. For one thing, there is only a limited amount of space where a link can be shown on a web page. It is highly competitive to get a list to be shown and to keep the list being shown. The incentive is to create a good list that will be popular in order to keep it in the public view for as long as possible. 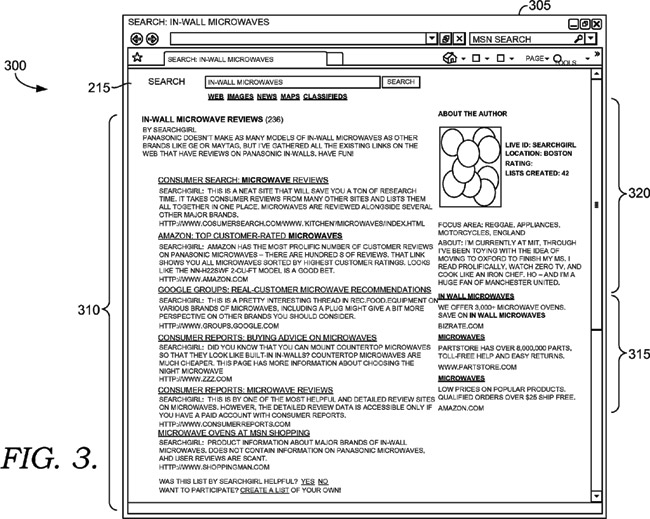 I think such a unforgiving incentive program and economy behind this idea is what is needed to make user-generated search results not only work well but work over time. Certainly I’ll be interested to see if Microsoft or any company has the guts to realize this idea in practice.