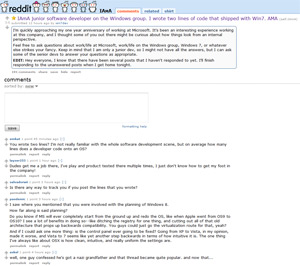 If you don’t already spend countless hours of the day browsing Reddit, it’s never too late to start. What I think sets Reddit apart from other similar communities is the discussion-only sections. More recently, a new section dubbed “IAmA” – short for “I am a…ask me anything” – has taken off by storm by allowing interesting and sometimes notable people (under the cover of anonymity if they wish) to answer random questions from complete strangers.

As dubious as this may sound, it actually works quite well and have since brought under the spotlight award-winning musicians, hackers, descendants of Nazis, 9/11 firefighters, lottery millionaires and of course, the most interesting of them all, Microsoft developers.

So far, three anonymous Microsofties have already stepped forward to answer several hundred questions in total. One worked on Windows Vista and Windows 7 (and will also be working on Windows 8), another is a 10-year Office veteran, and the latest is a junior Windows developer who wrote two lines of code that shipped in Windows 7.

Like most anonymous postings, what’s valuable is the honest insight into the politics, technicalities and thought process behind the scenes at Microsoft. Here’s just a slice of some of the most interesting responses I’ve come across so far.

“One more question: how much info does Microsoft have on us?” (#)

Almost none. Any data that gets collected (including data from WGA and elsewhere) is EXTENSIVELY filtered for PII (Personally Identifiable Information). If any data ever got through to somewhere it didn’t belong, like an email address, social security number, or credit card number, we would consider that to be a very serious bug and would place a very high priority on making sure we never recieved that data again.

In general, any data that we collect from users (and this includes our advertising) is impossible to link back to a unique person. I’ve worked with our privacy and legal teams on this stuff before, and they are deadly serious about it.

“Are you guys even thinking about the next os? or are you more focused on continuing to improve this one, update, service packs, etc?” (#)

Planning for “Windows 8” (the next version) has consumed all of our time for the past few months. It’s amazing to see how much work goes into just planning the OS.

Do you get to see other peoples code? I mean: is there some kind of version control used for the entire Windows branch, or is it more like: “I code my stuff and use compiled objects for the stuff I don’t need to know about”? (#)

Anyone who is working on windows can see the entire windows source base. Technically, anyone with access can compile the entire OS down to an ISO. Realistically almost no one does because it takes a ridiculous amount of time to do.

“The [Windows 7] leaks seem obviously intentional . . . otherwise we’d see leaks of other major software all the time, which we don’t — not even other Microsoft software. Please explain how I’m missing the point — why is there “not a lot we can do”?” (#)

But yeah, there are probably some positive benefits to it. We’re definitely not leaking intentionally (and if we are, they certainly haven’t told me about it).

If you like what you’re seeing, head over to the original discussions to read lots more. Of course, if there’s also something on your mind you want to ask you can also submit a question. Hopefully these guys (and others) are still around to respond to them.