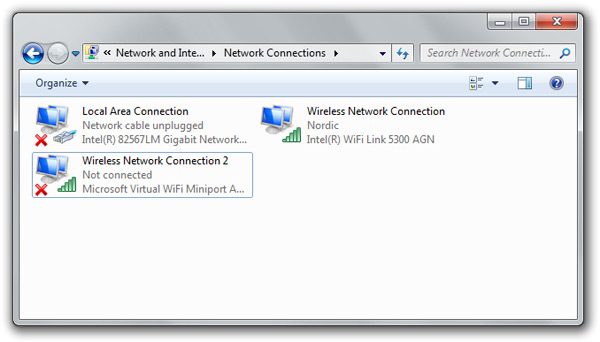 If you have a reasonably new laptop with an Intel WiFi chipset then I have some good news. A set of new Intel WiFi drivers made available just a couple weeks ago, version 13.0.0.107 if you’re playing along, finally adds the necessary driver-level support for the new native Virtual WiFi technology in Windows 7.

After downloading and installing the drivers (32-bit here, 64-bit here), assuming your WiFi chipset supports the functionality (which I can verify the 5300 can but 3945 cannot), a new “Wireless Network Connection” with the adapter name “Microsoft Virtual WiFi Miniport” will automatically appear in your network connections.

Recently, the internet has been abuzz with a new software called Connectify which interacts with this Windows 7 Virtual WiFi technology, but it appears their intention is to sell this application once its finalized. Personally I find it ludicrous that someone would charge for what is essential a wrapper to some functionality already baked into Windows.

To set up and use Virtual WiFi in Windows 7, without paying a buck, just follow these three simple steps:

Of course this functionality isn’t that useful day-to-day, but a powerful usage scenario for this internet sharing functionality via Virtual WiFi will be when you’re at an airport or hotel which limits your connection to a single wireless adapter. Not only would this save you playing switcheroo with the hotspot, but it might also save you paying for multiple connections if you’re traveling with somebody else.