If you’ve been watching Australian TV lately (I haven’t) then you might have noticed a subtle new Windows 7 advertising campaign custom tailored for the Australian Open broadcast on Channel 7.

Over the next two weeks during the tournament, Microsoft is sponsoring action replays, multi-angle replays and head-to-head profiles that will illustrate how Aero Snap – the Windows 7 feature that allows you to easily dock two windows side-by-side can be practically used.

Even though it looks a little bit cheesy from the video sample above, I think it does a decent job at illustrating a pretty useful feature to an audience that probably wouldn’t otherwise know about it.

Just thinking out loud, what might have been an even cooler advertising campaign is that if they had all the tennis matches played during the day as buttons in the taskbar, hover over them to see live thumbnail previews and then click on them to switch between the feeds.

On a related note, I find it mildly amusing that the live scores are available on Bing in the United States, but not in Bing Australia, where it is held. Google Australia however gets it right. 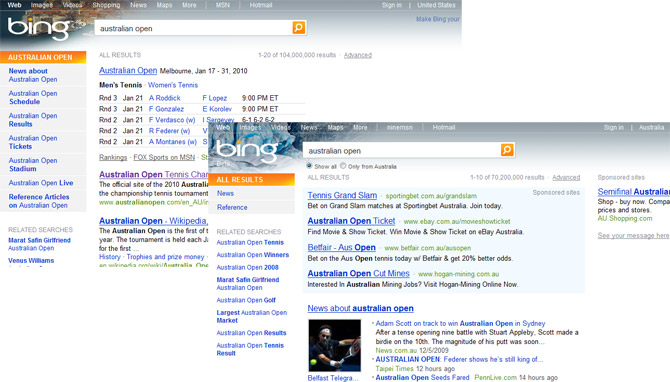