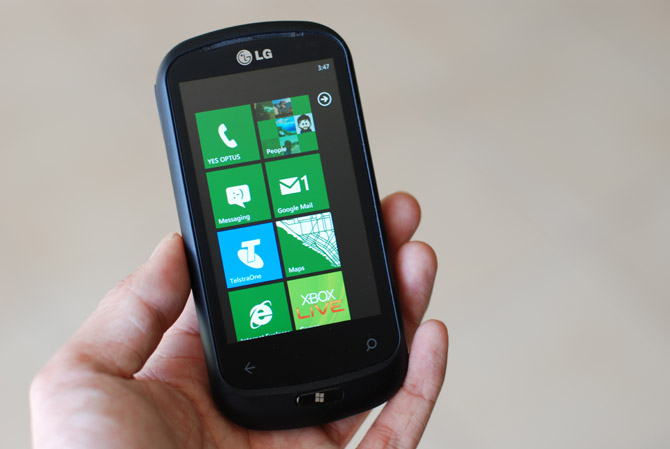 It’s hard not to fall in love with Windows Phone 7. From a distance, WP7 is undeniably fresh in a sea of familiar faces. Up close, it’s invitingly simple yet can still put a smile on your face with little gems of interactive delight; not unlike a product from Apple.

Although not the fault of the software by any means, as I’ve found after my week-long use, Australian users will be getting the short end of the stick with some essential service-based functionality watered down. Having said that, this is a great product even at the lowest common denominator.

Since the Microsoft press conference on October 12, I’ve been using an LG Optimus 7Q (also known as the LG Quantum in the US) as my only mobile phone. Bear in mind this particular handset is a pre-production device so I won’t make any judgements on the hardware, still, Windows Phone 7 shines.

It’s hard to believe just how Microsoft pulled off this hat trick considering the core of this OS, Windows CE, is what too made Windows Mobile tick, or more precisely, fail to tick. The result is not only a shell that’s comparable in usability and performance to the iPhone and Android, but also matches if not exceeds the expectations for a great mobile experience. 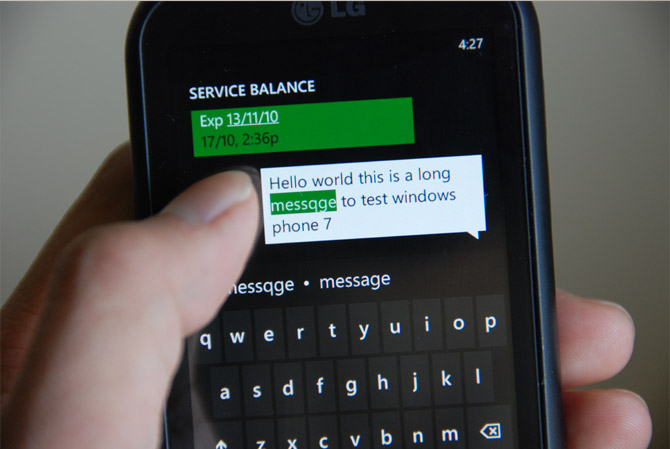 A prime example is the on-screen keyboard which is an absolute thrill to type on. Going above and beyond expectations for the few times when the prediction is wrong, instead of pretending it’s perfect, you can simply choose any word you’ve typed and reselect from the choices. Brilliant. 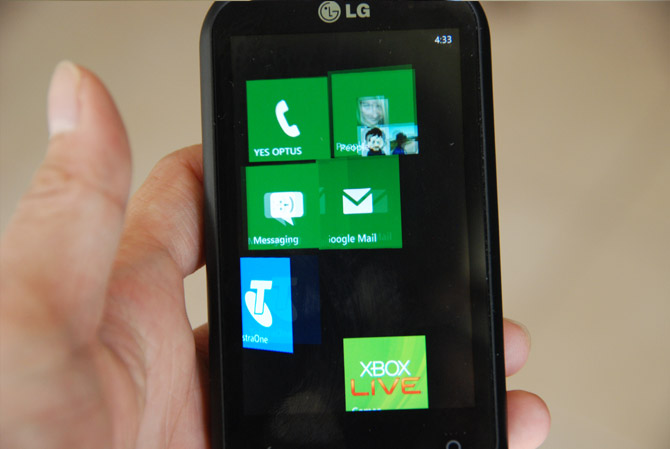 The Metro design language may have captured a lot of people’s attending with its elegant combination of text and solid colors through screenshots, but in practice, the animations are the icing on the cake.

If you have a thing for subtleties like me, you will very well find yourself tapping in and out of applications just to see tiles fold away and back for minutes on end. It’s not just eye candy too. The transitions adds a sense of fluidity between actions that helps the OS feel more responsive.

Out of the box, Windows Phone 7 delivers a lot of functionality. The usual suspects of a mobile platform – email, calendaring, music and photos are first-class experiences as you might expect.

Whether you get one or fifty pieces of email a day, you’ll find the email application makes reading and managing emails a painless if not slick experience with the aforementioned animations. It might sound childish but watching a deleted email sucked down and sent emails fly up makes me smile every time. 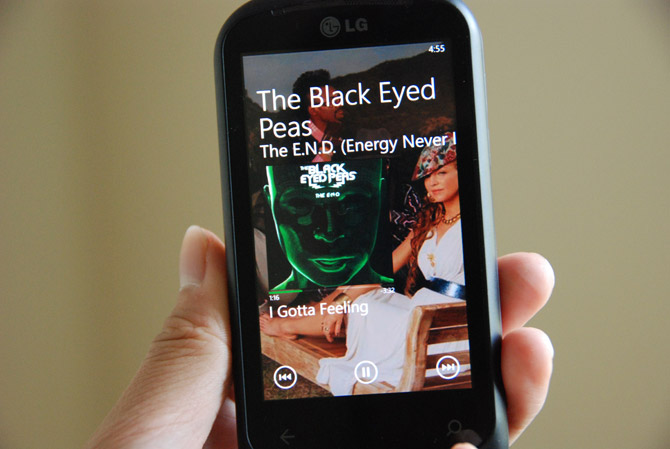 The Zune app for managing music, video and podcasts is quite easily one of the better mobile media experiences. The best thing about it though is the automatic WiFi syncing when you charge at home which means it syncs as often as it should, not just when you can be bothered to plug it in to the computer. For me, that is almost never.

Besides the given, there’s also the unexpected. The Office 2010 suite of apps are feature-rich yet practical for a mobile device which will prove useful for both enterprise-heavy users and the occasional note taker through OneNote. Even Internet Explorer (Mobile 7) makes an impressive effort as a confident mobile browser. I’ll be lying to claim it’s the best, but it should stand the test of casual mobile browsing. 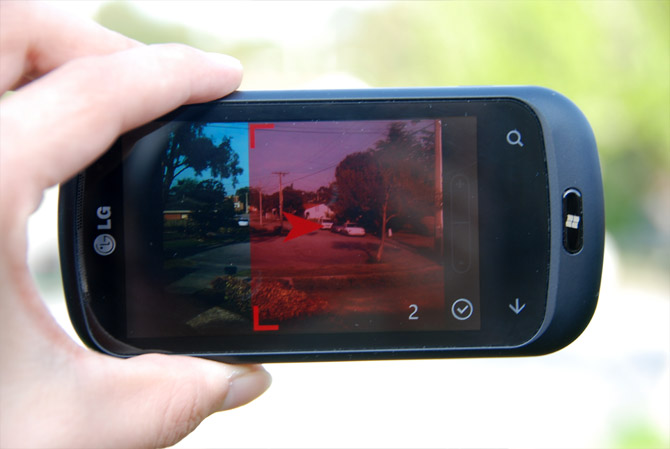 For the app-minded, the Marketplace already houses a library of applications and games of varying quality and functionality. There is the stupid, like a $0.99 farting dinosaur app. At the other end of the spectrum, there is an innovative LG-exclusive panorama photo app that takes advantage of the compass and works quite well if you try hard enough. Plus, everything in-between.

What’s important to note though is that there is a lot of potential in this platform for great looking, useful and rewarding applications and games. The marketplace might take up to half a year to mature but there is definitely momentum from both companies porting their popular applications across from other platforms and new developers breaking new ground. 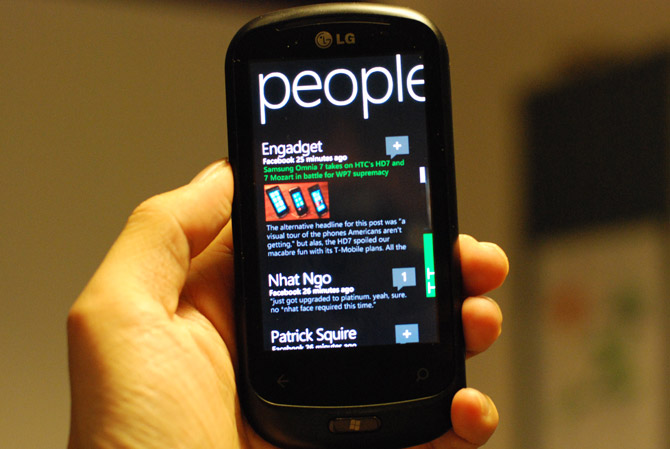 Granted the idea of integrating social networks on the phone is not an entirely new concept, Microsoft’s implementation on Windows Phone 7 is actually pretty compelling. The Facebook stream and other Windows Live-connected social feeds from the people you care most about are available right then and there just when you need them, without stepping in and out a plethora of apps.

The best example of where this integration is unrivaled is in the “Photos” hub. In there, shared pictures from all your contacts are collated from a range of social networks and web services through Windows Live in a single view. Compared to navigating through half a dozen websites or apps to see them all, it’s a no brainer.

Unfortunately, the web search feature, Maps application, voice search and the music marketplace is where the road gets a little bit bumpy for Windows Phone 7 in Australia. At launch, all of these experiences are crippled one way or another. And in the case of the Zune (music), it’s missing entirely. 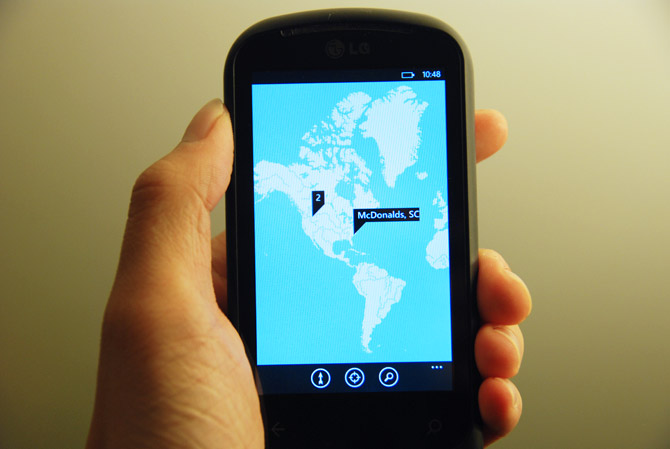 As illustrated above, in it’s default configuration Windows Phone 7 does not return any local results in either the Bing app or Maps. If you searched for “McDonalds” with the map centered anywhere in Australia, you will be transported half way around the world to the United States. And because Microsoft is locking the search functionality to Bing indefinitely, this has long-term implications.

Although the cause for these region-specific inconveniences is the result of market segmentation by Bing and Zune, Windows Phone 7 will suffer the blame for a poor searching and entertainment experience in Australia. Luckily though I have discovered a workaround to ease some of the pain until Microsoft addresses them, eventually (I hope).

In light of a few issues, Windows Phone 7 has a lot going for it. It’s a well rounded experience from day one and will only get better with time. At the same time, Apple and Google aren’t going to let their platforms fall behind either so don’t expect Windows Phone to stay dormant for as long as it did ever again.

One thing’s for sure though, Microsoft has caught up to the rest of the pack and the race is on.