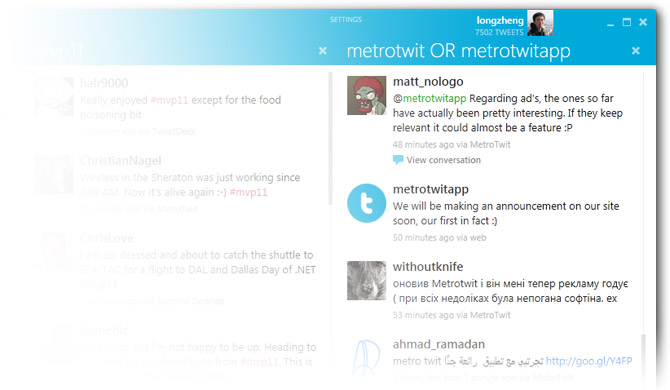 I’m reposting this from the official MetroTwit blog to facilitate a discussion.

As some of you may know, we begun a little experiment in the last update with the integration of an advertisement to hear what you, the users, thought of them. Since then, we’ve received an abundance of feedback through many mediums which we’re very grateful for.

Unfortunately, we may have mis-communicated our intentions when we released the update. Just to clear the air, it was never our intention to restrict your choice as a user which is why we’re making some changes, immediately.

Many users told us that they would be happy to pay to support our application and its development but were displeased with the lack of immediate functionality to permanently remove the ads.

In response to this valid concern, we just released an update that removes the ad for all users until a practical solution to permanently hide the ad is implemented.

To be perfectly frank, the net loss of developing MetroTwit is starting to catch up with us. Don’t get us wrong though, we have no intentions of giving up. We had and still receive a lot of intangible value out of developing and sharing what we believe to be a great software experience, only that we would love to deliver more features and improvements even faster, if the opportunity makes sense.

We hoped and still hope there are scenarios where we can strive towards our goal to deliver the best Twitter experience on Windows without any financial contribution from our users, but none have presented itself at this point in time.

With the context above, we begun exploring some more practical solutions. We stumbled across 140proof who, although offers an advertising solution which is all too common, stood out as an interesting option.

Their solution served ads which in theory should be much more relevant to a user’s interests. Based on feedback we’ve seen in the last 24 hours, this has proven to be true, for some at the least. We look forward to more feedback on this in the future.

The company also has a very clear and concise privacy policy related to the personalization feature of the ads which we’re very confident about.

We want your feedback on a few ideas

Last but not least, not only do we want to keep you in the loop but we sincerely do value your feedback. With that, we would like some feedback on two alternative monetization models we’re considering.

We look forward to your input,