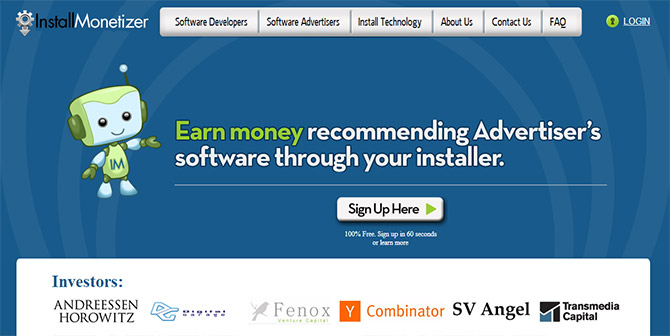 Many people in the technology startup community have very high regards for Paul Graham and Y Combinator, the exclusive seed accelerator program in Silicon Valley which has under its belt acclaimed successes like reddit, Airbnb and Dropbox. There’s equal standing for Andreessen Horowitz, a private equity investment company with notable alumni such as Groupon, Instagram and Skype.

Now those people and companies have put their most valuable support – money, experience and brand – behind “InstallMonetizer“, a company that describes itself as a “windows based software monetization platform”. Very carefully selected words.

Let’s not beat around the bush. This is a company that makes drive-by installers that bundles all sorts of life-saving

toolbars and adware when installing apps on Windows. 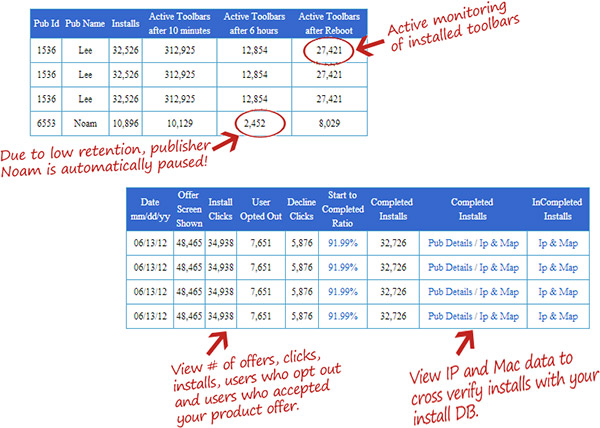 Although the company claims it is all “non-personally identifiable data”, according to its website this surprisingly includes not only IP but the globally unique MAC addresses.

According to a TechCrunch article today, InstallMonetizer has been supported by a $500,000 investment from an array of top-tier Silicon Valley investment firms. If nothing else, this guarantees that not only does this company and its practices continue to exist, but it will continue to grow.

As an experience-critical Windows user and app developer, I can sympathize with software developers all too well. It can be damn hard to make a good app and it can be even harder getting compensated for the hard work. So it’s understandably enticing when a company teases an independent developer with promises of great wealth.

I know this because I’ve been in that exact situation. Multiple times.

Over the course of two years since I’ve been designing the MetroTwit for Windows app, we’ve been approached by three different crapware installer offers. Of course they don’t call themselves that.

For the purpose of full disclosure, here’s what one email exchange looked like:

My name is [Name removed] and I`m the Strategic Partnerships manager at [Company removed].

I am contacting you since I came across metrotwit.com activity, and was highly impressed both by the professionalism & quality of your product.

I would like to discuss a potential partnership between our companies that will significantly increase Pixel Tucker Pty Ltd revenues.

Would you be available for quick call to discuss our offer in more details.

Looking forward to hearing back from you.

Thanks for your email. Would this be some sort of distribution partnership? If so, unfortunately we have a strict policy not to install any other third-party apps with MetroTwit.

Hello Mr. Zheng,
Thanks for your quick reply.

We launched similar cooperation with WinZip, Nero, TuneUp, Yahoo, and dozens of other reputable brands so this it’s a shame we can’t work together.

Personally I believe you can still present high quality product to your users and make good monetization out from it.

Based on our estimation this type of cooperation, will add a new revenue channel, estimated at $90,000 – $120,000 each year for your company.

I can assure you that your users will be presented with a compliant offer screen, which they can choose if they want to install the [Product removed] toolbar or not. We can even have it on opt in (users need actively give their consent to the offer).

In case you change your mind on this in the future, kindly let me know so we can make progress.

For the purpose of brevity, other offers included per-install payouts between $0.30 to $1.50. Not an insignificant amount of money if you factor in many of these companies encourage multiple bundles at once. If one doesn’t make it wrong, four can’t be that bad either.

I’m not going to delve into the technical aspects of crapware – its effects on system performance, reliability and satisfaction are pretty well documented. The fact that there is a thriving ecosystem of “crapware, adware, spyware” removers is enough evidence it’s a significant issue.

Perhaps more importantly, I strongly believe crapware installers among other foul practices have eroded the trust of the Windows app ecosystem as a whole.

What used to be a fairly standard flow of app discovery has turned into a minefield of misleading download links on websites, defaulted checkboxes or sneaky install crapware buttons in position of “next” in wizards and browser homepage overrides. And it just takes one wrong click to have irreversible consequences.

Last but not least, disregarding the moral factor of this investment, I’m puzzled why such visionary investors would invest in a process that is slowly being phased out by changing industry practices.

Since app stores and mobile apps are now the de facto standard of software for all the major computing platforms, this is one of few startup investments I can think of in a market that is well-documented to be shrinking in the near future.

In conclusion, I admit every person and company has the right to set their own moral compass, but it’s genuinely disappointing to see such respected and influential people and companies put their weight behind a practice that has undermined and continues to undermine the credibility of the Windows app ecosystem.

At the same time I’d like to draw attention to and acknowledge to all the Windows app developers who has refused and actively refuse crapware by putting the interests of their users and other hard working developers above their own.

Update 16/1: In a bizarre discovery by my friend Terence Huynh, it turns out Microsoft plays a part in its own platform ecosystem’s demise by using InstallMonetizer to promote the Bing toolbar, according to an older version of the company’s website.

We’re investigating. It will take at least a couple days, because we’ll need to meet with the founders in person.