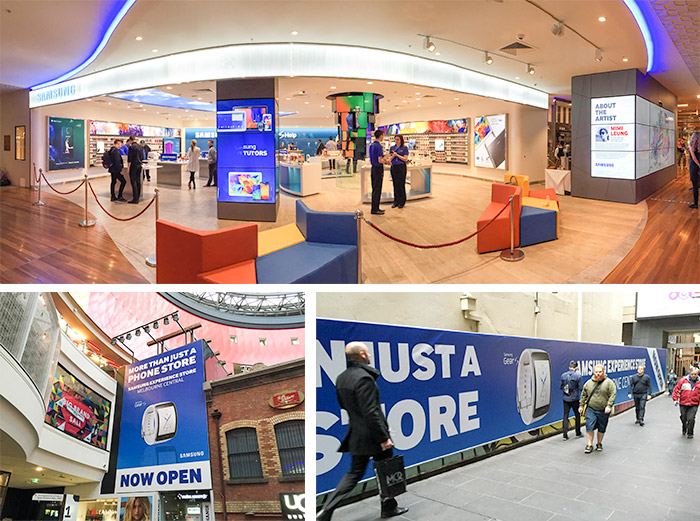 Samsung Australia is officially opening a new “Experience” store in the heart of Melbourne tomorrow. This morning it gave media the chance to try out some new unreleased products including the Gear S, Galaxy Note Edge, Note 4 and Gear VR which the public will also be able to preview at the store.

The company’s obsession with curved screens this upcoming product cycle has intrigued me from a usability point of view to say the least. After spending a few minutes with them I admit there’s no doubts there’s some part technical “look what we can do” gimmick, but having said that you can’t completely rule out some practical benefits too. 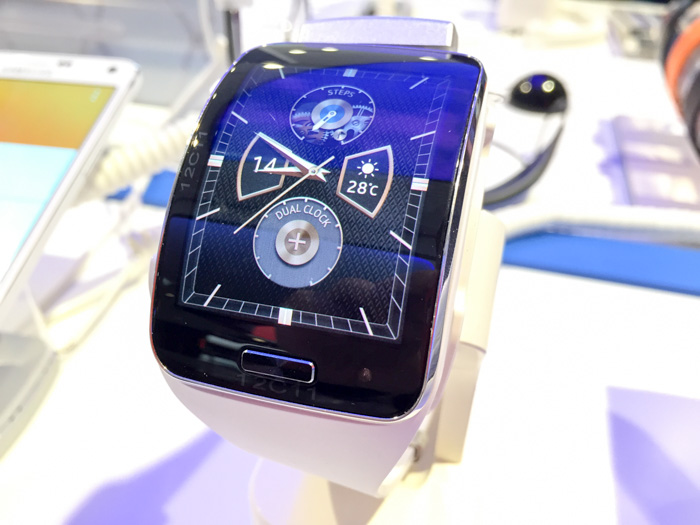 I’ve been following the wearable smartwatch category pretty closely and Samsung is a notable player with three generations of watches already under its belt. Undeniably the Gear S stands out from the competition with its curved screen but also for running the Tizen OS, not Android Wear.

(Ignore the bulging silver block at the top in all my photos. This is part of the obnoxious but necessary anti-theft security since the watch is removable from the strap.) 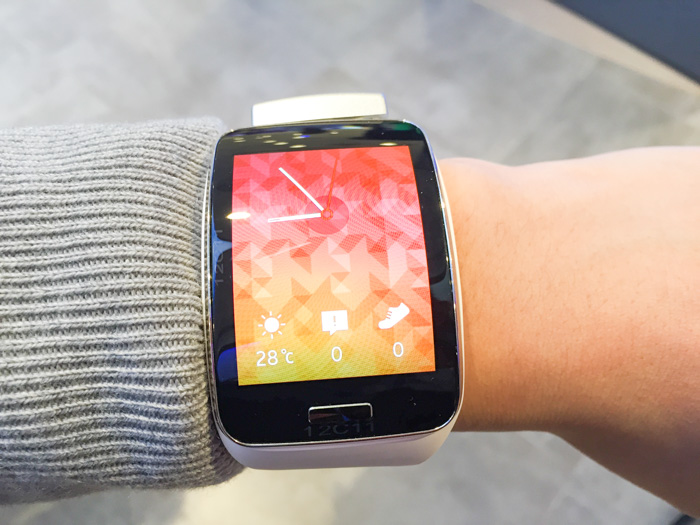 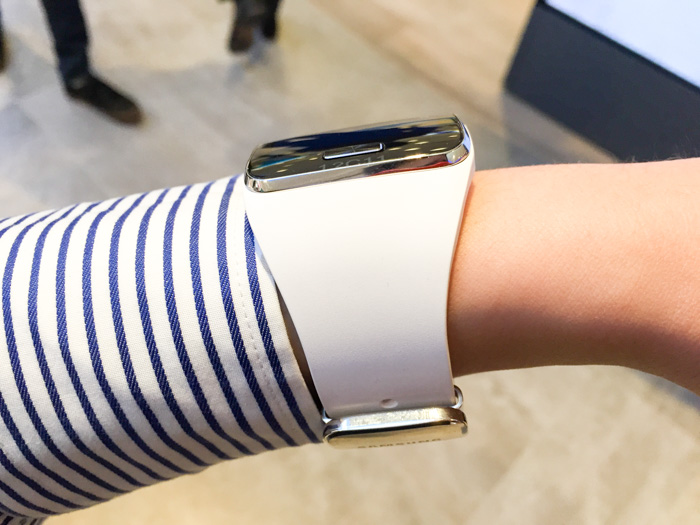 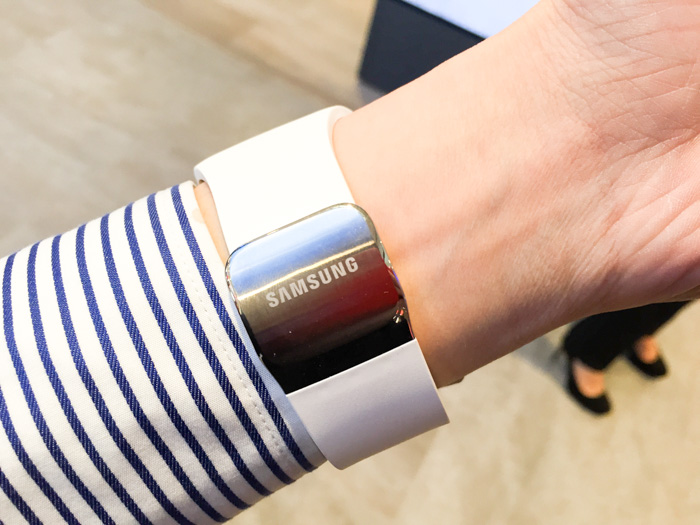 Putting the Gear S on the wrist makes a very compelling argument for the curved screen. No doubt the screen is big looking at it front-on (and I have tiny arms), but the fact that the screen is curved actually minimises its profile from the side. To put it another way, if the screen this size was not curved than it would have been an unwieldy bulge on my arms.

The curvature was also not an issue when it comes to swiping gestures (which you do a lot of) or visibility. The AMOLED screen had excellent brightness and viewing angles that negated any effects of glare of distortion caused by light bouncing from more angles on the curved glass. 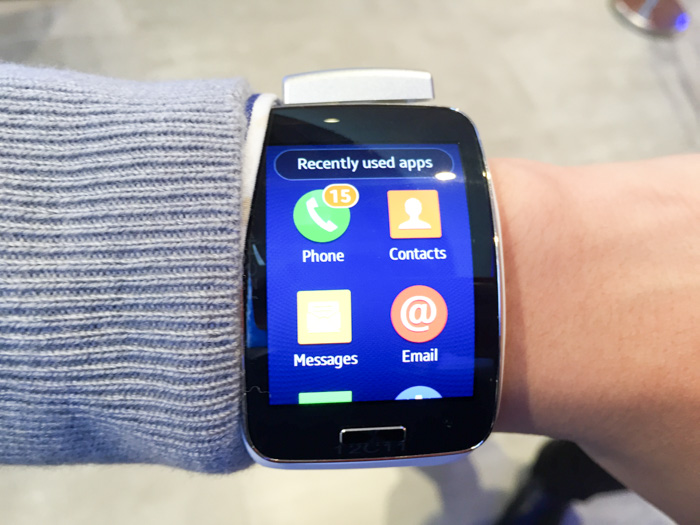 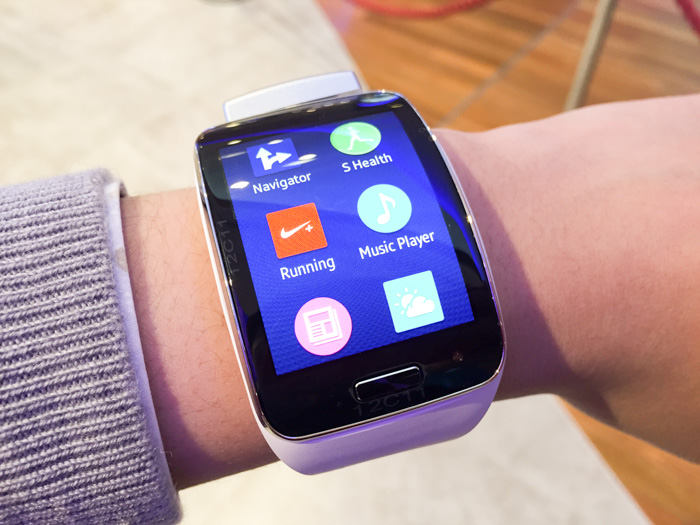 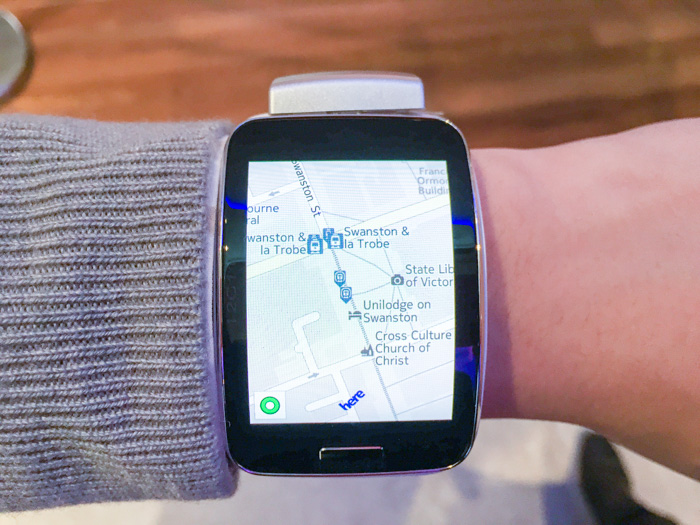 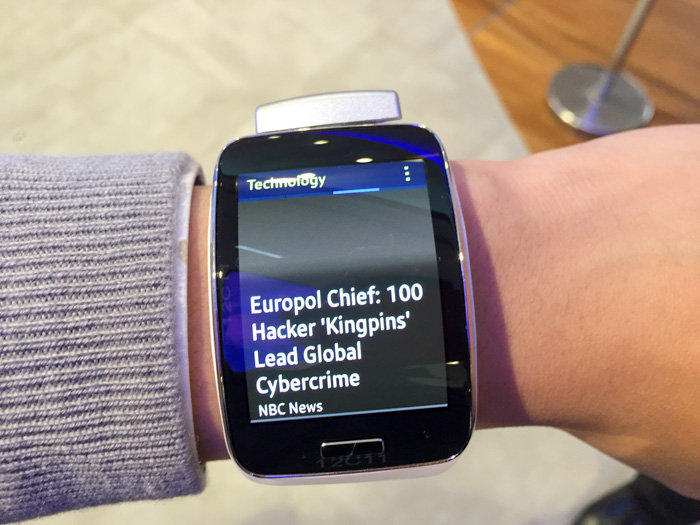 The Tizen OS and third-party apps are surprisingly responsive. Even pinch to zoom in the Nokia HERE Maps app worked without lag or jitter. I do worry about the wearable apps ecosystem outside of Android Wear but we can only wait and see how developers handle cross-platform wearable apps. 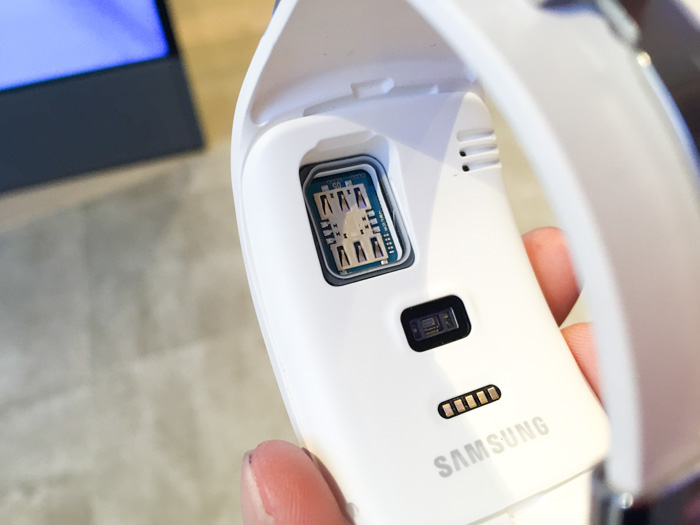 The Gear S is also one of the first smartwatches with both onboard GPS and cellular (Micro SIM), making it possible to use without tethering to or carrying a phone (otherwise it still supports WiFi and Bluetooth). This enables the ability to get directions, track runs/heartbeats and share the result directly, but it’s yet to be seen if this is practical with the already limited battery life of smartwatches. 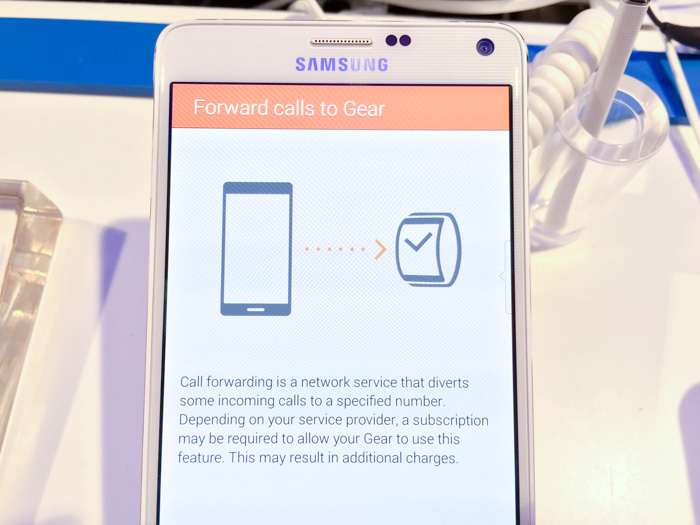 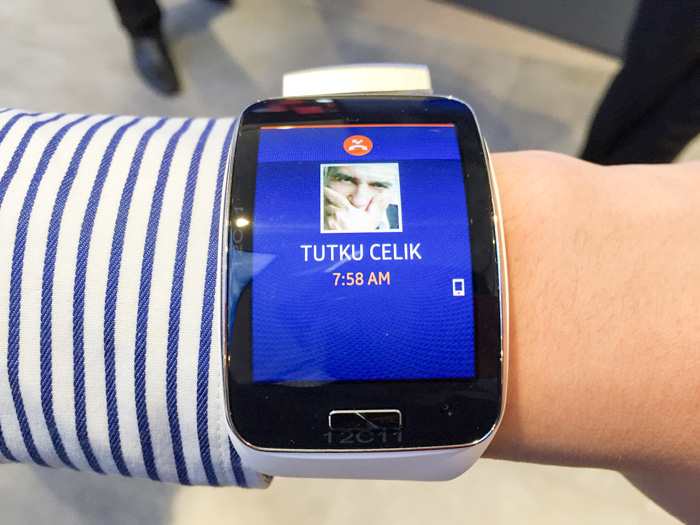 Furthermore, because the Gear S has an independent cellular connection, the companion Android manager app can also be set up to forward all calls from the phone to the watch.

In summary, I’m quite excited for the Gear S. Although I think it would have been a much more compelling device running Android Wear, its feature-rich hardware and screen in particular is actually a remarkable piece of engineering and design. 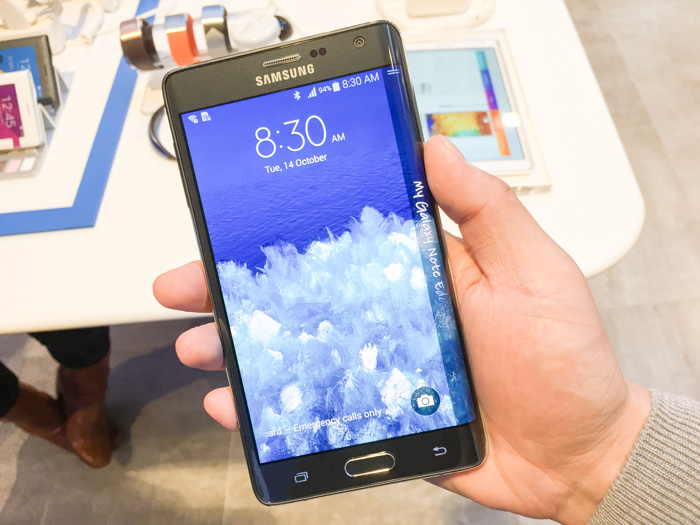 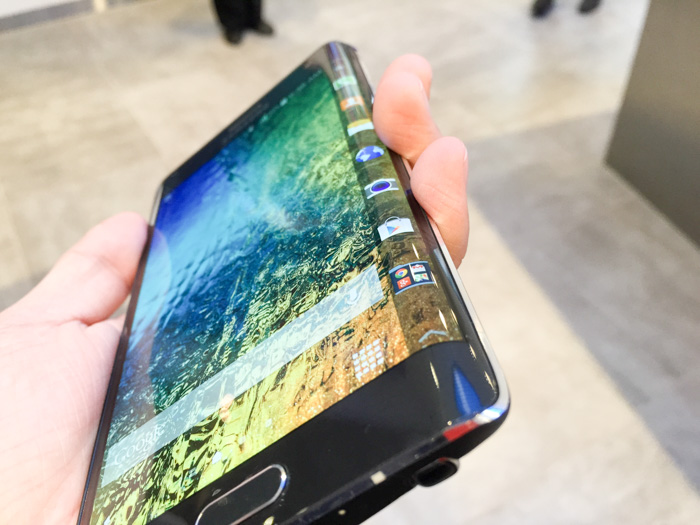 A lot of people including myself was and maybe still are skeptical of the edge. The truth is even the Samsung staff think it’s “edgy” – they admit this isn’t going to be for everyone if most people. 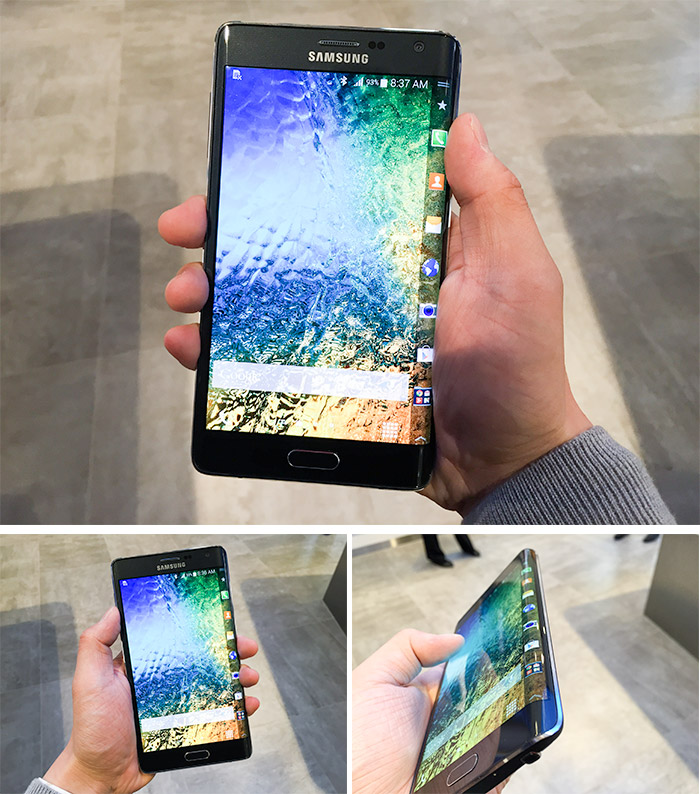 Putting the Edge in the palm for the first time is certainly a different feeling to every other phone. It’s actually not the curve that’s the issue but the sharp right angle it makes at the edge which is a little bit awkward (especially for a right-handed user) but not overwhelmingly bothersome after getting some used to.

Using the edge is fairly straight forward. By default on the homescreen you have access to a dock of application icons that can be used to launch apps. You can also swipe left and right to other customisable widget/notification-style panels like news, sports, weather and Twitter. Swipe from bottom gives you quick access to a ruler, stopwatch, timer, flashlight and microphone. 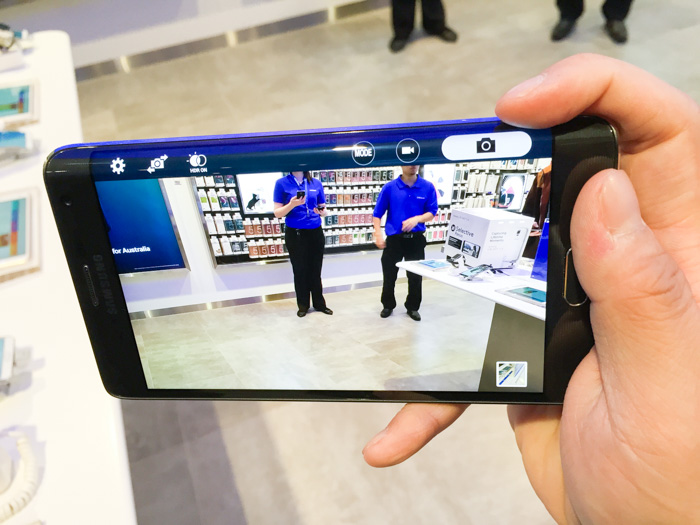 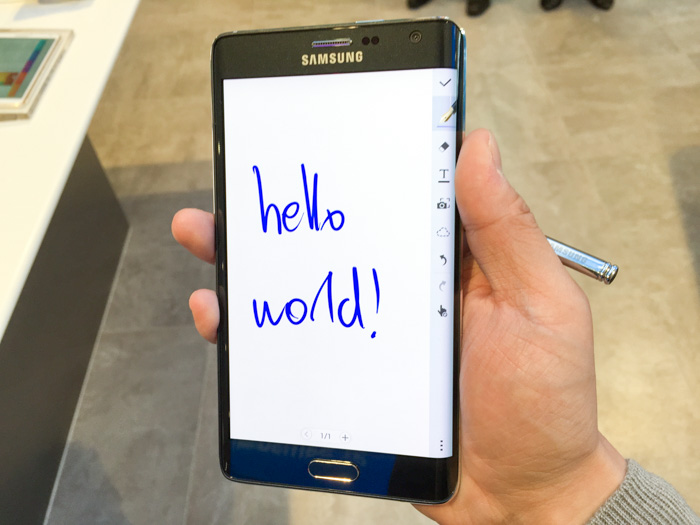 Two of the apps demoed utilising the Galaxy Note Edge SDK were the camera and note-taking app. Both of these apps take on the approach of shifting UI buttons to the edge, leaving the main display an unspoiled canvas which any minimalist would appreciate. 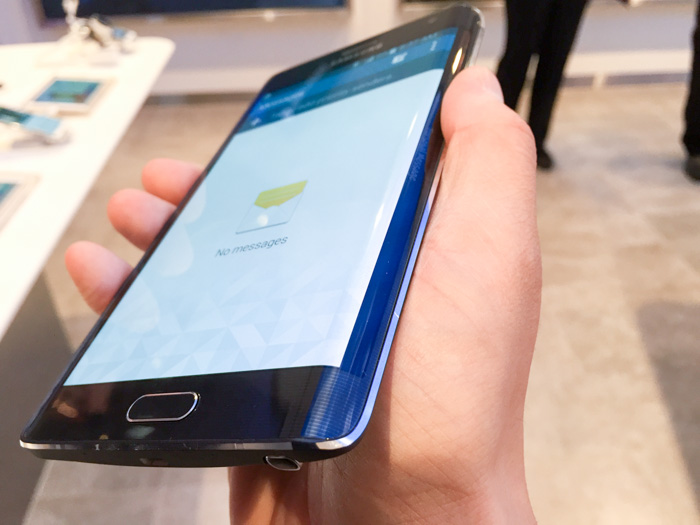 For apps that do not have any support, the screen automatically shows a black strip with subtle faint text which can be personalised. You can still swipe to access the panels as you can on the homescreen. As a very minor nitpick, you’ll notice that such apps actually extend a little bit into the curve instead of being fully contained on the flat surface. 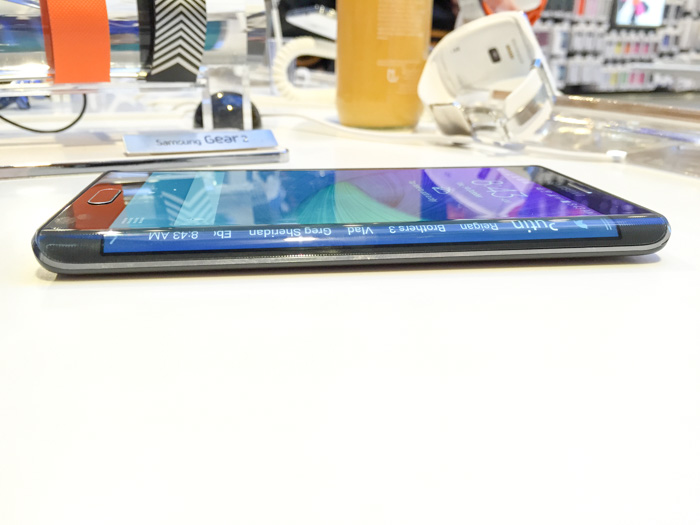 Disappointingly the panel does not rotate when the phone is lying flat on a table, which makes it difficult to read from the right side. I was secretly hoping it would transform into a stock-ticker for unread notifications. 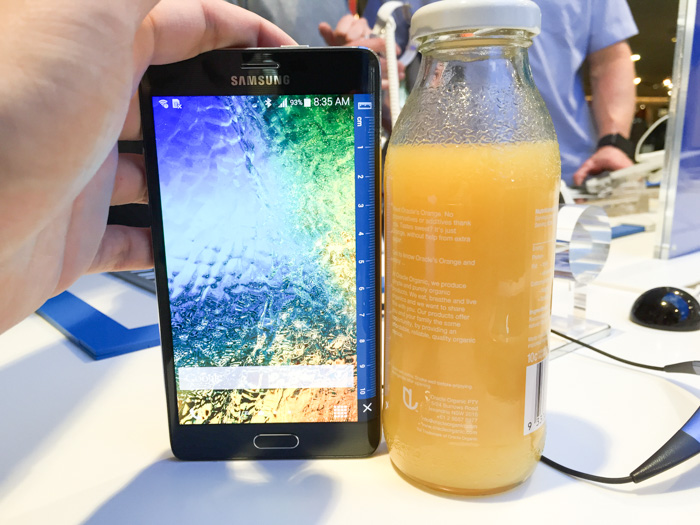 In conclusion, I think the edge concept and implementation is certainly interesting but I’m skeptical of widespread third-party support since even Samsung’s own app support is quite sparse. If nothing else, it’s a really cool ruler.