Escape room games seems to be popping up everywhere around the world. In Melbourne alone there are at least half a dozen companies now offering one or more puzzle rooms. Some appear to be horror themed while most take the premise of a detective story.

Recently I was invited by Escape Hunt in Melbourne to check out what the hype around escape rooms was all about.

When you think about it, escape rooms are kind of weird. You voluntarily pay money to go inside an enclosed space with the sole purpose of trying to come back out. Having said that, for the same reason why “escape the room” computer games are entertaining, it’s the process of some 60 minute of puzzle solving that’s actually very rewarding. 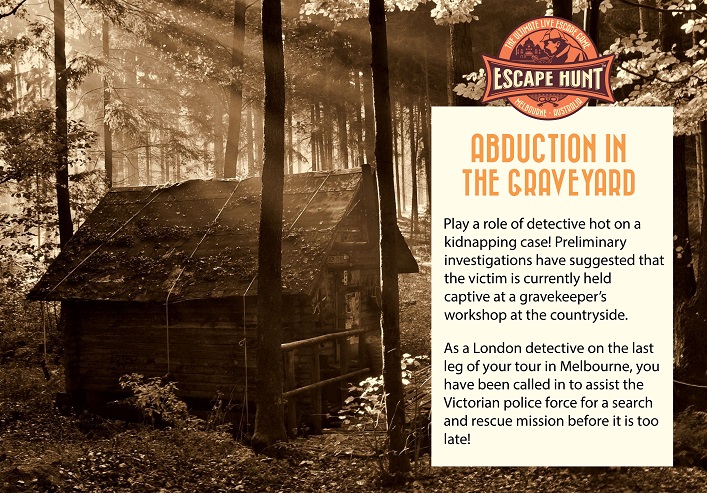 A group of friends and I attempted “Abduction in the Graveyard”, one of the three puzzles available. We were provided a brief backstory together with character names and roles based on the world of Sherlock Holmes.

It’s a lie as good as Santa Claus – all pretty much useless but all in good fun.

Before going in, sixty minutes in a single room didn’t sound challenging enough, but when the LED clock high in the ceiling starts ticking down, there’s actually real pressure in the group to save the fictional girl from the kidnapper who threatens her life. Admittedly in this particular story there’s no real reason to “escape”, we’re just very financially-attached detectives.

Puzzles led to clues, clues led to more puzzles. This process repeats over and over, becoming more elaborate and integrating more game mechanics that you pick up over time. (Just like the difficulty progression of a computer adventure game).

The puzzles and props included but is not limited to physical, auditory, visual, mathematical, and it would be criminal not to have a UV puzzles. If only the kidnappers actually invested their money instead of buying elaborate combination locks, maybe they wouldn’t need to abduct people for ransom.

While we conquered many challenges in a reasonable time, a small handful actually challenged the group’s collective problem solving. In two occasions, a well-timed hint from the intercom with the game master (spectating through CCTV cameras) was necessary to steer us in the right direction. In the end, our group’s first ever attempt took 63 minutes, a tad slower than average.

I must admit there were real moments of frustration but also real moments of accomplishment with your friends. The price is admission is a bit higher than your typical casual entertainment, say the price of a movie ticket, but it was a much more memorable experience.

I can’t wait to get locked in another room.

Disclosure: The game my friends and I participated in was provided for free by Escape Hunt Melbourne.