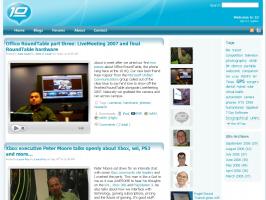 Adam Kinney, the sole designer working on Microsoft’s community sites Channel9 and On10 has just launched the new On10.net design. He says, “the last design was mainly UI work and this time I tried to make the style pop a bit”. The tools of the trade were himself and Photoshop, both of which are great.

My take on it is, the design has a very vibrant Vista feel to it. Elements of the Vista flare can be seen in the header, probably has no meaning but has a nice abstract feel to it. The navigation bar looks exactly like the Vista toolbar, but the ‘hover’ image of the links has a weird glow which looks like two spotlights. But other than that, it’s a conventional column based layout.

A few things out of the ordinary, but perhaps expected in the Web 2.0 generation. The minimum optimal resolution is 1024×768. Finally, more websites are moving away from the restrictive 800×600. It utilises AJAX technologies. Check out what happens when you change the page at the bottom of the page. Neat!

Aside from the design, I think On10 is a great resource for videos on all things technical both inside and outside Microsoft. It still feels like an extension of Channel9, but I hope the differences between Ch9 and On10 will be clearer in the future. Adam also tells me he’ll be working on the design update for Channel9 now. Look forward to it.