According to a Microsoft Research sponsored survey for the Microsoft website, Microsoft.com, it assumes Windows Live is the next version of Windows. Did anyone with any actual knowledge about Windows Live or Windows look over the content of this survey? 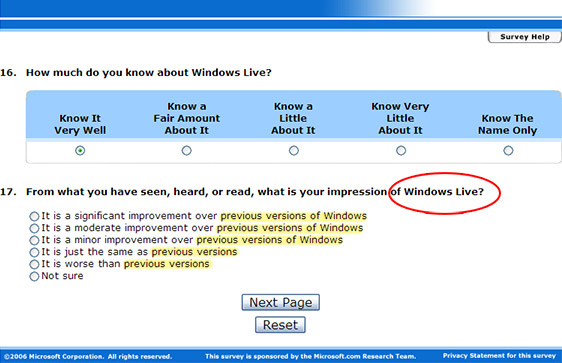 I hear Windows Live is a minor improvement over Windows XP. Only a teeny weeny wittle bit better. Not much. Just a wittle bit. There are three positive choices and only one negative. Can everyone say “bias”?

ADDITION:
A reader by the name of Robert Banghart who shares my thoughts on the quality of Microsoft surveys expressed his views to me in an email. I thought his views were extremely appropriate to the issues I have discovered today, so I’ll share them here. And it’ll also serve as an open letter to the people who manages this survey and every other Microsoft survey.

Robert says, “Unfortunately, I have found major deficiencies in just about every one of the surveys I have taken. They often don’t ask open questions, limit the available choices, and don’t provide an ‘other’ choice.”

A survey shouldn’t feel like an assessment marking sheet in a school. I shouldn’t feel like I’m trying to get someone a raise for doing such a great job. For example, if I were to respond by ranking the search feature as extremely poor, there are no prompts to ask me why it is so, or how it can be improved. It’s almost like they just want to know what number I rank them on, but wouldn’t care less about what would make that feature better.

Robert says, “Even when they do and when they provide comment text boxes, they invariably put some arbitrary and undisclosed limit on the number of text characters that can be put in the comment box.”

Robert says, “I’ve resigned myself to thinking that my efforts are simply scraped off by the (third party) survey-taker before the other answers are passed on to Microsoft.”

Guess which questions are more likely scraped off? And how is this ever so related to the Microsoft.com website?

I guess that’s the problem when companies deal with third-parties that act on their behalf. They don’t really care about gathering feedback to improve a product or service, they just want to collect responses.

Update: Surprisingly, the survey has been silently updated with the correct question, “From what you have seen, heard, or read, what is your impression of Windows Vista?”.

Update update: Actually the problem hasn’t been fixed. The problem is actually due to the survey asking random questions. It asks a range of alternative questions including “Windows Mesa, Windows Live and Windows Vista”. Although the following page does not reflect that Windows Live is not an operating system.