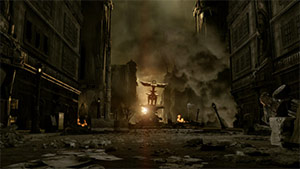 Last year, one of the greatest games of all time had a commercial of equal status – “Mad World” for Gears of War. Even though the advertisement was undeniably just a well-crafted machinima video, it worked on so many levels. Beautiful cinematography (by Joseph Kosinski who also worked on the Halo 3 ad), touching storyline and the perfect song. Some claim it worked because it was so different to what we were used to in video game commercials – loud gunfights and corny techno-music.

It caught up so well with the enthusiast community that it propelled “Mad World” straight to #1 on the iTunes chart, and sparked a massive remix contest on YouTube. Some replaced the song with other songs of similar style, others took the song and plastered it over other game machinimas. All in all, it was a huge success from a marketing standpoint.

But today, Mich Mathews, Senior Vice President of Central Marketing at Microsoft has come out admitting that they didn’t intend to create the mashup phenomenon it generated. Speaking at the Microsoft Strategic Account Summit, Mich was discussing the effects of building reach through information sharing by the customer. “The ideal campaign may get two times, four times, even ten times more of that reach via pass along and remixing.”

She then used the Gears of War commercial as an example. “We got more than 700 community-created mashups that are being posted on YouTube that have now been viewed over a million times. This type of passionate engagement with the brand we think helped make Gears of War the No. 1-selling videogame last holiday season and, indeed, has helped to make it the fastest selling videogame of all time.”

She then goes on to spill the beans. “Now, one dirty little secret here that I have to confess, we didn’t create this ad for this kind of customer-generated content, and I have to say, though, it’s something certainly now that we factor in when we’re going through that creative process.”

But as the way things are, the more you try the less it will happen again.