If you build it, they will come. If you build another one, will they come again? And another? In April of 2004, Microsoft launched Channel9 – the first official Microsoft community of its kind where developers and evangelists could interact with real Microsoft employees plus a backstage pass into the development process of many of the hot products at the time, including Longhorn. Whilst this type of interaction is nothing special today, it was a significant cultural shift back then. 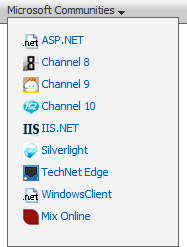 How many is too many? That’s exactly what I thought of when I heard about TechNet Edge, and that’s also question being discussed on Channel9’s forums today. I understand why Microsoft would want to segment its websites based on different audiences, but I also feel it’s dividing an already short attention-span but more importantly, the community.

For example, as a full-time student and based on Microsoft’s segmentation, I should be visiting and loving Channel8 – the site for students. However in reality, I have to dabble in all of the different sites, spending less time in each, because all of them have some content that’s interesting to me, even if I’m not a developer or IT professional. Compare that to the experience before the urban sprawl of communities, I spent all my time and effort on one site (Channel9), with one group of community members, reading one RSS feed, learning one navigation design and fabricating one online persona.

The consensus on the forums is that Microsoft should remove the artificial classification of videos and division of communities (forums, members) to form one central access point where the user can make the choice on what content they are/are not interested in. Not only could this be beneficial to existing users, new visitors could avoid the dilemma of ‘choosing’ a community when they should belong the ‘whole’ community.

The chances of that happening in the short term or at all is rather slim, so I’ve stitched together a short-term solution to at least the contents problem. Instead of subscribing to each of the five main feeds (8, 9, 10, Mix & Edge), I’ve made a dead-simple Yahoo Pipes which aggregates all of them into a single feed. You can access that “all-in-one” RSS feed here.

Speaking of Channel8, I was part of a video interview for that which was suppose to be published last month. I wasn’t that bad, was I?