From silence to the grand opera, finally Internet Explorer will join the league of a handful of next-generation web browsers that passes the Acid2 test.

Whilst remembering Acid2 is not a standards test – in fact it breaks a few standards to test how browsers handles malformed code, passing the test represents the browser will properly support a range of next-generation CSS 2.1 features that opens up a range of creative opportunities for web designers. It doesn’t test everything, but these are probably the most useful features. 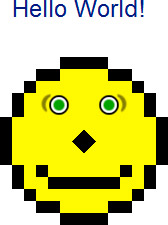 It’s one thing for Firefox, Safari and Opera to pass the ACID2 test, but it’s another for the default browser of the most widely used consumer operating system to support it too. And not only is it a web browser, the rendering engine is used in thousands of third-party applications to draw interface elements.

Imagine when Internet Explorer 8 is pushed out via Windows Update to every Windows user as a recommended update, then web developers and designers will sleep like a baby knowing their standards-compliant code should work on any browser and any platform without a single hack. Wouldn’t that be nice.

In other news today, a decade-old game is also breaking expectations by showing its face. Coincidence?