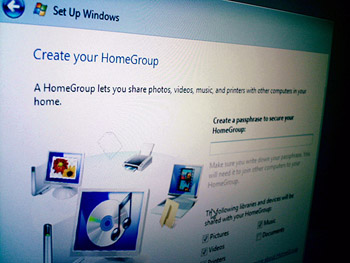 Half a decade after its initial conception, Windows Codename Longhorn still proves to be a great source of ideas. One of which known as “Castle”, appears to have been revived to be a feature of Windows 7 as “HomeGroup”.

We know what Workgroups are – Microsoft’s implementation of a peer-to-peer computer network for Windows to share files, printers and other resources. So what are HomeGroups?

That mystery didn’t last very long as someone was kind enough to point me to some well-aged reading material which described exactly what Castle was, and the same person claims what HomeGroups are about to become.

The document I am referencing is the Windows “Longhorn” Pre-Release Privacy Statement (Microsoft.com hosted), published October 24, 2003 for those of you playing along. This was a legal document to give users of pre-release versions of Longhorn an outline of the data collection and use practices of any network-related features that was in Longhorn at the time. Castle happens to be one of them.

It writes, I quote and highlight,

What This Feature Does:
The “castle” feature allows users to have the networking functionality of the domain, including roaming the user’s profile, machine trust and having a consistent user identity throughout the network. The main difference with Castle is that users do not have to setup a dedicated machine, such as a domain controller, to maintain the trust and identity relationship. It also makes it easy to share and access files on those computers. Each computer on the same subnet can discover and join an existing castle. Or, the user can create a Castle. To join an existing castle, you must know the login credentials of an administrator account already part of the castle. Only non-blank passwords can grant access. This helps ensure only authorized computers join the castle (use of strong passwords for administrator accounts is highly recommended). When a computer joins a castle, the accounts on that computer will be added to the list of accounts accessible from any computer in the castle. User specific data (e.g. their password, access rights, and preferences) will be replicated on each computer in the castle and kept in sync. In addition, the newly joined computer will inherit and respect all policies from the Castle.

Information Collected, Processed, or Transmitted:
To help standalone computers find the available castles on the subnet, the machines in the Castle send a broadcast a beacon containing the Castle’s name. Be aware that if you share a subnet with other people (e.g. your neighbor when using a cable modem without a hardware router/firewall) they may be able to see the name of your castles. In this case only choose castle names you are comfortable sharing with others. When joining a castle, the credentials you enter will be sent using security technology (NTLM) to other computers in the castle.

Use of the Information:
Broadcasting the name of each castle makes it easy to discover what castles are available on the subnet. When joining a castle, the credentials help ensure only authorized computers join the castle.

Choice/Control:
The user must initiate joining a castle using the user interface provided. Whether the user’s computer is able to join a castle depends on whether an administrator of a computer already part of the castle has provided the user with the appropriate credentials. When a castle is formed, a beacon containing the castle name will be broadcast. In this release there is no easy way to disable the beacon. A mechanism to disable the beacon will be added in a future release.

Important Information:
The Internet Connection Firewall (ICF) is enabled by default in this software. Therefore, if you create a Castle, it will send out the beacon, but because ICF is enabled, other computers running this software that have the firewall enabled won’t see the beacon.

If HomeGroup is indeed Castle byte for byte, then what it is basically is the equivalent of an enterprise-grade Active Directory roaming-profile network setup simplified into a wizard dialog with a password field and checkboxes. If it’s not, well, that would be a shame.

From what I understand, Castle was intended to supersede Workgroups which could translate into HomeGroups eventually replacing Workgroups in Windows 7 as well. I think a move most people who’s ever been puzzled by home networking would welcome.