Microsoft Australia has recently put together an advertising campaign for Windows Vista called “I can do that”. The premise of the campaign I assume is to demonstrate what you can do with Windows Vista, but I’m not too sure about the execution. For example, take a look at this commercial which a variation of has been playing on at least two popular Australian commercial radio stations.

I don’t know about you, but this is quite an annoying advert. At least one other Aussie share the same feeling. It’s downright amateurish and borderline cocky. What little of the end result we see is nothing to be proud of anyway. The kid who plays the director just makes me want to punch fluffy animals. The ad is not engaging, interesting or even informative. If it wasn’t for this, I wouldn’t dare show anyone else.

A related online campaign at one of the radio station’s websites is equally bad. It aims to show the difference between “before” and “after” processing by Windows Live Photo Gallery. 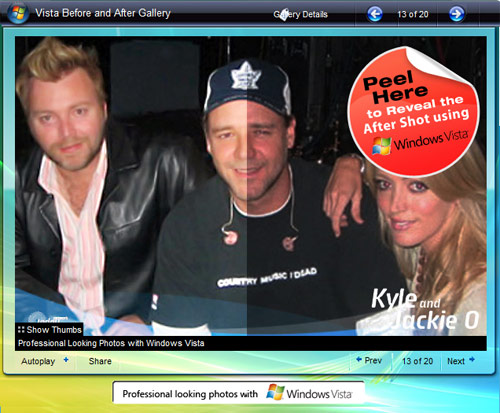 At a glance, it’s basic exposure correction. If you pay more attention, it’s actually also airbrushing the wrinkles on the people’s faces. Something Live Photo Gallery cannot do and obviously post-processed in Adobe Photoshop (check EXIF).

If this is in any way related to the $200 million advertising fund injected into Vista this year then that’s even more disappointing. Maybe try McCann Worldwide instead?