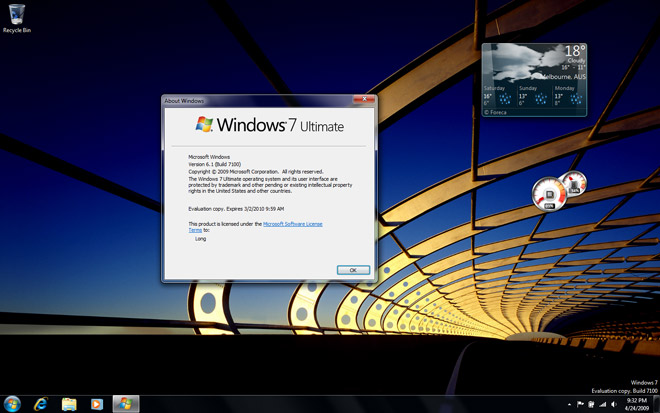 If you’re like me and watched from a distance leaked builds of Windows 7 fly past like water balloons in a water balloon fight, then the time to join the fun is now. The highly anticipated release candidate (RC) build of Windows 7 has been leaked and its authenticity is entirely undisputed. First looks reveal nothing significantly new or different, but if you’ve been wanting to get a vibe of how far Windows 7 has come since the public beta, especially performance, this is the build to get.

Tip: Those who have a portable USB hard drive can follow my simple guide to making a super-handy bootable USB Windows 7 install drive. With this, I installed Windows 7 RC in around 10 minutes.

Update: If you’re not feeling that adventurous, prepare to grab this RC build on May 5 when it’ll be publically available. Or if you’re lucky enough to have a MSDN/TechNet subscription, from April 30. In the meantime you can get yourself a legitimate Windows 7 Beta CD-Key (which is valid for RC) from the Microsoft website if you don’t have one already.