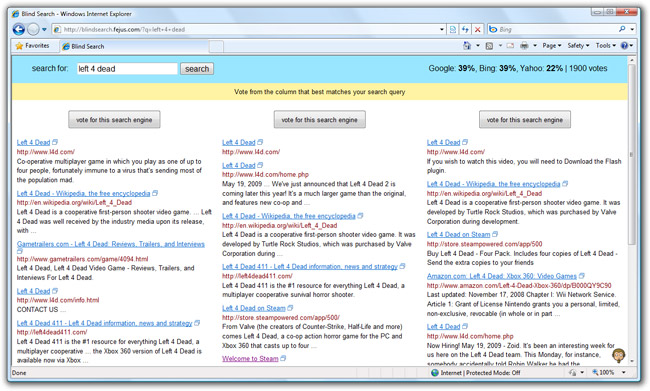 A couple of months ago, Microsoft conducted a research study where they found search engine branding had an impact on the perceived quality of results. Now, months later, Bing is launched and people are once again ranking the quality of search results. At first, there were direct side-by-side comparisons, but of course there’s no better challenge than a double-blind experiment.

Michael Kordahi, which I feel compelled to disclose is a Microsoft employee, has set up such an experiment, dubbed “BlindSearch” which you can try here. On the site, you enter a single search query which results three sets of unbranded results. After viewing the results, you are given an option to vote on one set of results, which then reveals the provider and adds it to the tally.

Update 5: Michael is aware of the problem and looking for a workaround. Yahoo results has since been fixed.

Update 6: Some people’s attempt at gaming the system has forced the tallies to be now removed.