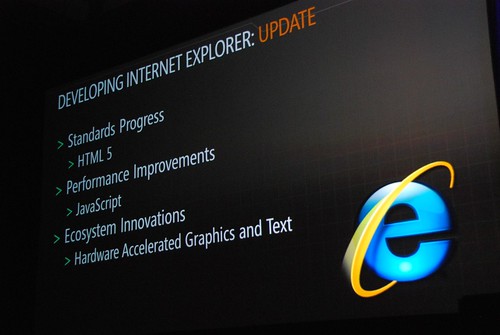 It shocks me as a devoted Firefox user to say this, but Internet Explorer 9 could very well leapfrog the competition in the race of next-generation of web browsers in 2010 thanks to a groundbreaking platform-wide implementation of a hardware-accelerated renderer that I think is quite literally “a free upgrade for the web”.

What makes IE9’s implementation of hardware-acceleration so compelling is that it has major real-world benefits and its completely transparent to both end-user and web developers. Using the new capabilities in Direct2D instead of GDI, IE9 is able to rendering all the visual elements of websites much faster and smoother using the powers of the graphics processing unit (GPU), instead of the CPU. One example of where this functionality really shines is in the Bing Maps demo where continuously panning the map is just as smooth as navigating a map in a 3D strategy game.

During a meeting with IE general manager Dean Hachamovitch, he explained that this feature hasn’t already been implemented (or publically demoed) in other mainstream browsers today is because by no means this is an easy feat to accomplish. At least one issue he pointed out was the fact that there may be other components inside a frame that handles its own rendering, like Adobe Flash for example.

Having already overcome the major implementation issues, Dean was able to confirm this feature does not actually introduce any incompatibility issues besides a subtle difference in the layout of text as fonts are rendered by the more advanced DirectWrite engine.

Essentially, this feature coupled with an already improved and continued investment in web standards and overall browser performance until it is released, IE9 is in great shape to become the browser with the best browsing experience in 2010 when one might expect it to ship as a standalone download.

I may very well make the switch back.