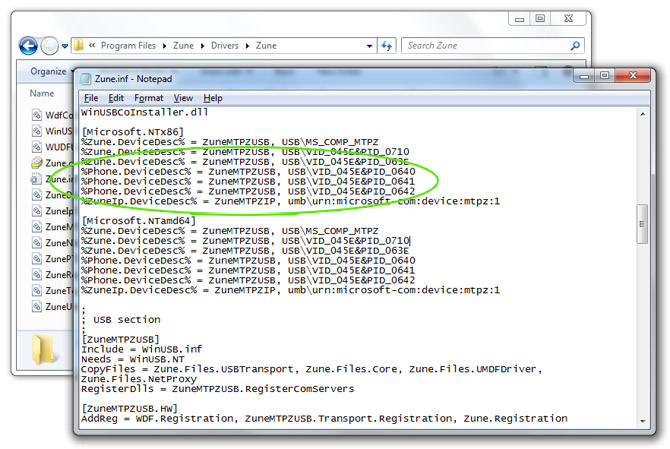 Coinciding with the scheduled Zune.net maintenance today, a new Zune software update was also released (version 4.2.202.0 for those playing along at home). What might appear as just a regular software update is actually hiding a very big secret. The elusive “Zune Phone” is pretty much confirmed.

As some of you might know, an .INF file is essential component of a driver package responsible for identifying the driver and associating it with compatible USB hardware IDs, and in this case, the Zune.inf file is responsible for associating devices with the Zune driver.

New to this version of the driver which was actually generated on October 20, 2009 are several lines which pretty much speak for themselves.

Moreover, just as how the current three generation Zunes are represented by three different IDs, there are three unique class IDs and specifically Product IDs (PID) that identify three potential “Zune Phone” models (not storage capacities) off the bat. My bet is that they’re not just capacity variants (since various Zune capacities are all grouped under the same PID), but three actual hardware SKUs.

A timely coincidence before Mobile World Congress? I think not.

Update: Whilst it is possible there might be system-wide Zune integration into Windows Mobile 7, this particular driver references specific hardware IDs that are locked to a vendor (Microsoft) and product which under USB body regulations cannot be masked, thus this has to be Microsoft devices. “Pink” anyone?