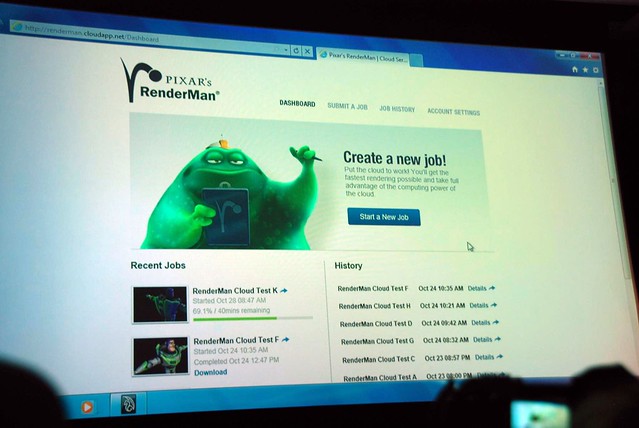 To be honest, Microsoft “cloud” demos usually put me to sleep, but not this one. At the PDC2010 keynote yesterday, Pixar Animation Studio’s Chris Ford demoed a cloud-hosted prototype of their Academy Award-winning Renderman solution that in my opinion makes the best case for cloud computing I’ve seen yet.

The Windows Azure-powered prototype website, albeit extremely polished, is an example of how the company could easily transform its industry-leading product limited in reach by its hunger for resources into a service that would allow anyone from small studios to even indie filmmakers could then take advantage of the powers of Renderman, even if they don’t have the resources to establish and support a rendering farm. 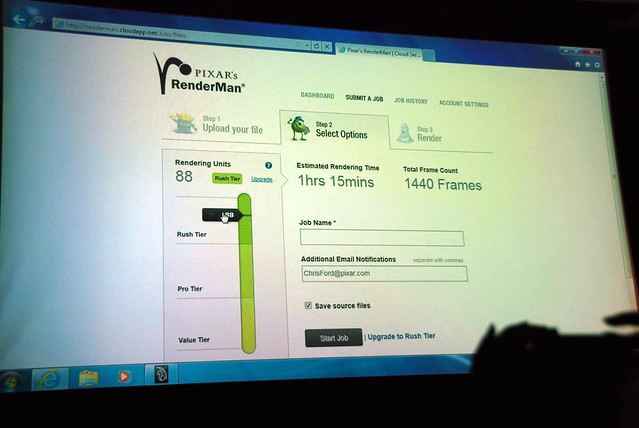 Although the idea of “outsourcing” rendering is neither exciting or new, where the demo really hit home Microsoft’s vision for cloud computing was a simple slider (shown above) where you could balance (in realtime) how much you were willing to pay against how long the rendering job would take.

Those familiar with Microsoft vision videos might remember “Overnight Success” (jump to 1m:30s) where a similar UI allowed for the immediate provisioning of processing power to accommodate extra load.

Both of these examples, although subtle in implementation, emphasizes one important message about cloud computing, that is, it’s not just about offloading the management of servers to a third party or even the ability to take advantage of a lot of potential processing power, but the flexibility to scale (both up and down) at a rate that’s not only feasible with traditional (high performance) computing but not practical.

You can find more photos of the Pixar Renderman cloud prototype here.