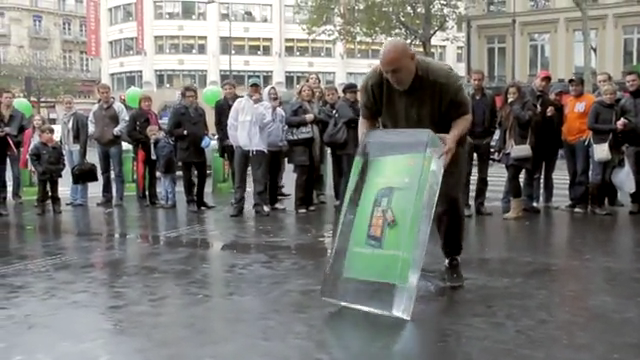 It looks like some of the alleged $400 million marketing budget for Windows Phone 7 went into making several ice blocks for a guerilla marketing campaign in Paris, France to coincide with the worldwide launch.

Although my French is limited to “Je ne parle pas français”, it appears the marketers handed out flyers to strangers on a busy street who then had to have a unique barcode scanned to check if they’ve won a phone. However, there was a different way to win that involved a bit more effort.

The highlight of the campaign is where and specifically what the prize was wrapped in – ice. A huge block of it, with the phone frozen in the middle. The winners had to figure out a way to break the ice. Some used street furniture to their advantage, others employed tools with fierce force. All in all, lots of fun.

Video embedded below. Action starts around 1:35.