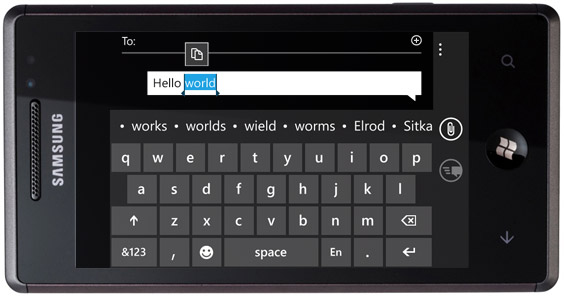 Dying for copy and paste on your Windows Phone 7? It appears some OEM service centers have begun flashing phones with newer firmware and Windows Phone 7 ROM containing copy & paste functionality. Although this might sound like NoDo, it actually isn’t.

One xda-developers user “lonely2k5” who had his Samsung Omnia 7’s speaker replaced under warranty has received an unexpected surprise update to his phone. He reports that his phone is now sporting a KA1 firmware with an OS build of 7.0.7355.

Of course those familiar with build strings would know this is not the NoDo build that will be pushed out via the update, it being build 7389. Bizarrely, this user may have received an interim developmental build somewhere between RTM and NoDo. Considering how stubborn the WP7 update architecture appears to be, it’s questionable if official updates will work on his phone in the future.

Given the problems some Samsung owners ran into when applying the pre-NoDo update, it just might not be a bad idea to preemptively send your phone in for servicing. Who knows, you might get an in-development Mango build.