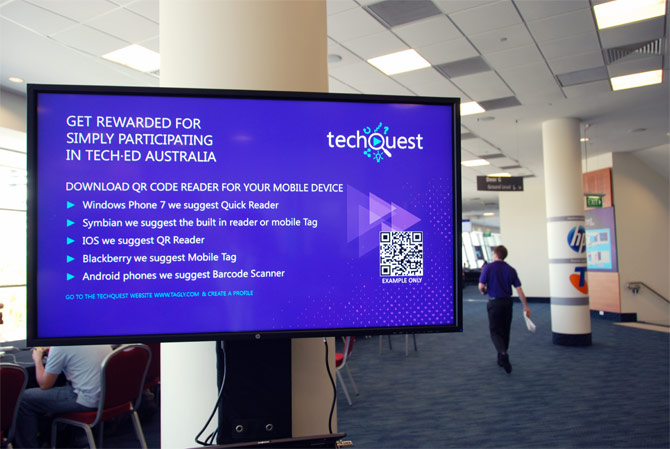 Attending technology conferences just got a lot more fun and rewarding. This year at Microsoft’s TechEd Australia 2011 conference, attendees got the chance to try an innovative new service that adds an element of social gamification to the conference with a $9000 prize pool.

By bringing the concept of achievements to real physical environments, the TechQuest TechEd 2011 competition encourages attendees to explore the venue, participate in activities and meet people for the chance to scan QR codes with their phone to reward them with a “badge”.

Obviously the more badges the merrier, however there are also rewards for a particular collection of badges, including hidden ones that are not listed on the website but clues are given out on the event’s Twitter feed.

During the 4-day event, 997 registered players scanned and were rewarded 5017 badges with an average of 5 badges per player.

When over $9000 of prizes is on the line – including HP TouchSmart PCs, XBOX Kinect bundles and Windows Phone 7s, it’s only normal some people want to gain an edge. At least one user was found cheating the system and had his competition account reset.

Out of the 45 possible achievements, some of my favorite include:

The winners of the competition will be announced at the TechEd Australia closing keynote this afternoon.