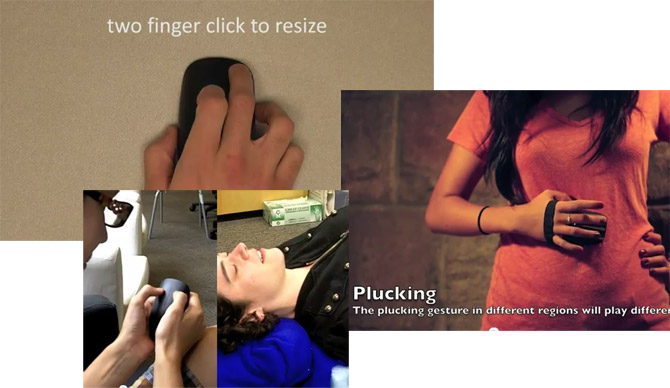 The Microsoft Hardware blog yesterday featured the winners of the UIST 2011 Student Innovation Contest where university students were challenged to come up with interesting uses for the Microsoft Touch Mouse with the public sensor SDK. Between the 30 groups that participated, the projects ranged from the surprisingly practical to bizarrely intriguing.

As a highlight of some of the projects that I found interesting, TUI.TAR was the first prize winner in the creative category. This application turned the Touch Mouse into a virtual guitar with plucking and strumming capabilities. Even though the music it generates leaves a lot to the imagination, this was a very creative use of a device that otherwise would not have been used horizontally.

One of the most practical projects was “Window Manipulation“. As the straight forward name implies, it enables more advanced window manipulation through the Touch Mouse with gestures than what Microsoft ships out of the box. For example it allows users to move windows with simply three fingers on the sensor.

The most intriguing project has to be Moussage. This allows users to physically message another person on an electronically-controlled bed that translates the touch sensor input into motorized vibrations. Although the project sounds reasonably practical, the idea of being able “message oneself or a distant friend” as the authors describe it sounds a little bit awkward.

Other notable entries worth mentioning include the FlipMouse which simulated a tilt sensor by using the mouse upside down, and Grip to Identify which is a login replacement by sensing how users grip a mouse.

The six prized students teams took away a combined $6000 worth of prize money contributed by the Microsoft Applied Sciences Group. Video embedded of my favorite projects embedded after the break.