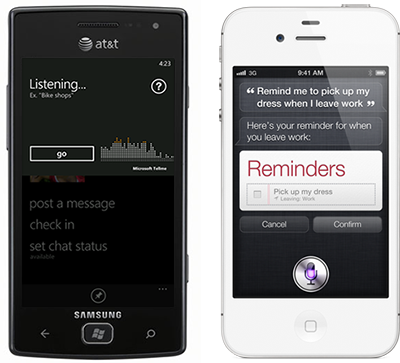 In a Forbes interview with Microsoft’s Craig Mundie, Chief Research and Strategy Officer, he contended that comparing Siri on the iPhone 4S and Tellme on Windows Phones are much alike. Craig says,

At least from a technological capability you could argue Microsoft has had a similar capability in Windows Phone for more than a year… All that is already there, fully functionality for years.

I respectfully disagree. Tellme might be state of the art speech recognition technology, one of the most accurate and adapted to different accents, however its commands are still syntax-based. “Call John. Find pizza.”

Where scenarios exceed the confines of syntax-based functionality, Tellme doesn’t have much to offer. The example Craig used of messaging, “message Person, say message, send” is more of an exception than the rule.

In comparison, I regard Siri as a speech interaction technology. Because it places much more emphasis on context, it appears to be accurate enough for the limited set of functionality it provides. Speech recognition might not be new technology, but Siri definitely puts a pretty face on it. It remembers your name, responds through voice and makes jokes.

“What’s the weather going to be like this weekend” is what you expect in a conversation, not “Find weather in Melbourne” which is like computer talk.

Now to say Apple invented this would be false, Apple bought Siri – a very smart acquisition. Of course Tellme, which was also acquired, has plans to make itself more natural too and they most likely will, but that’s not happening overnight. Siri is available today.

The next big phase of Tellme is in the upcoming XBOX dashboard update where it will power Bing search. You could say “XBOX Bing Batman” but the XBOX doesn’t talk back, like “Would you like to watch The Dark Knight?”. Although it makes you wonder what a voice for XBOX might sound like.