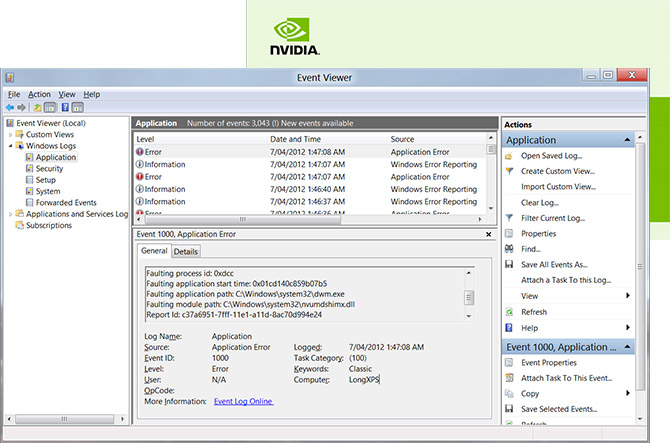 tl;dr If you have a dual NVIDIA & Intel graphics configuration and are running the Windows 8 Consumer Preview experiencing crashes (black screens) when launching Metro apps, there’s a workaround.

Last week I received a new Dell XPS 15z laptop (which has its own set of issues but I digress) and one of the first things I did was to load the Windows 8 Consumer Preview on it for it to become my primary Windows 8 development machine.

Sooner than later, I discovered launching some Metro applications (mostly third-party ones) would flicker the screen black and eventually send me to the Windows login screen. This was a real roadblocker.

After some quick research and brute-force trial and error, I’ve come up with an elaborate but effective workaround for those of us lucky enough to have an alternate GPU fallback in the system.

Aside from the obvious fact this won’t work if there’s no alternate integrated graphics processor, this workaround also has the side-effect of disabling some display functionality which may be tied directly to the NVIDIA GPU – most likely the HDMI port and of course 3D grunt processing power.

I’m hoping this is only a temporary workaround until NVIDIA fixes the underlying crash in their next beta driver update.

On a related note, AMD users should also be aware that the Windows 8 Catalyst drivers are also plagued with a problem in OpenGL, but there’s a workaround for that too.