When it comes to home entertainment technologies, Australia is playing a bit of a catch up. Netflix having just launched here less than 6 months ago and many new local streaming providers soon-after, Aussies are still finding their way around streaming entertainment services and devices.

There’s been some confusion to what Telstra TV actually is. It’s not a new streaming service (Telstra already has two, Bigpond Movies and Presto) and it’s not a replacement for Foxtel cable TV.

All it is, is a hardware device that connects to your TV and streams videos from third-party services. In fact, it’s a rebadged version of the Roku 2 standalone streaming player previously only sold in the US. Don’t worry, the little purple “Roku powered” tag on both the box and remote constantly reminds you in case you forget.

Out of the box, it’s a really simple product. It comes with a set top box, a remote, power plug, a HDMI cable and some very light reading material. 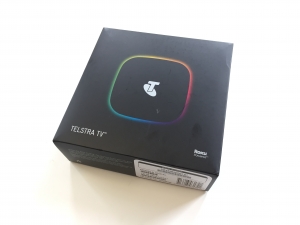 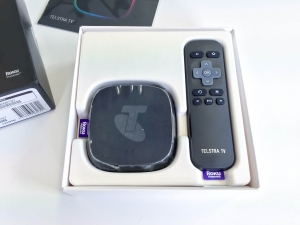 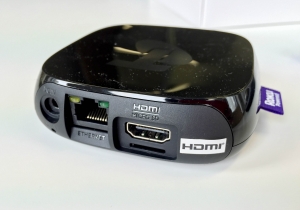 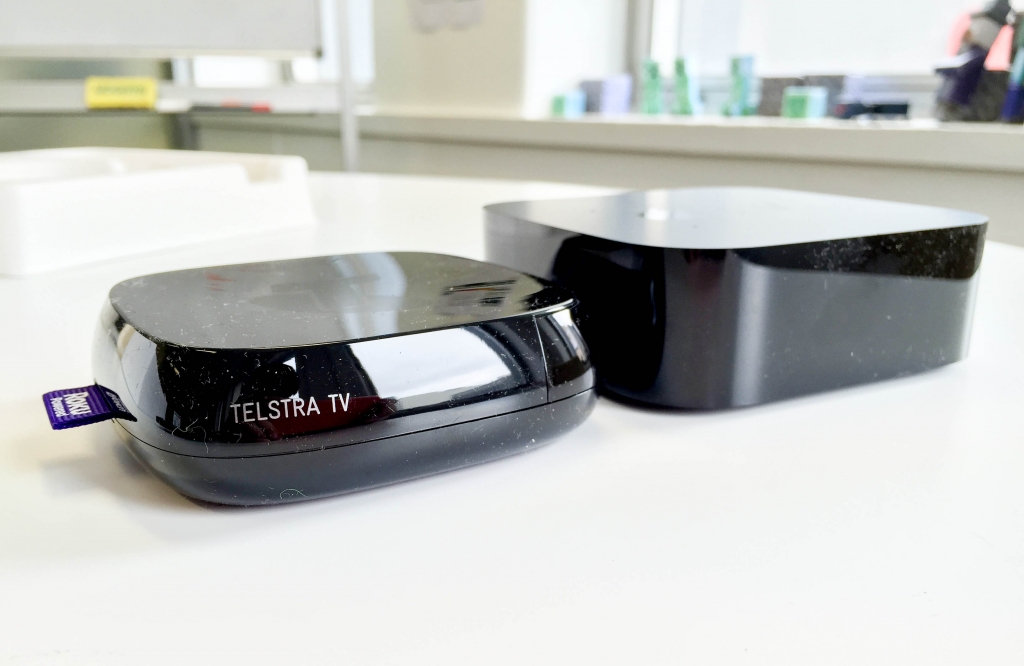 Since the third-generation Roku 2 (2720) was originally released in 2013 (and actually discontinued in April 2015), both the hardware and remote is starting to show its age.

The set top box is reasonably small, light and stylish enough to place on your TV which is very important since the remote is IR-based (not Bluetooth) so you have to point directly at it. It’s roughly the same size as the older Apple TV and a bit smaller than the new Apple TV.

Speaking of the remote, although I can appreciate its simplicity with only a handful of buttons but boy does it look dated. It’s shaped like a capsule which means it’s easy to spot and won’t fall into the abyss of the couch, but it also feels unnecessarily clunky. 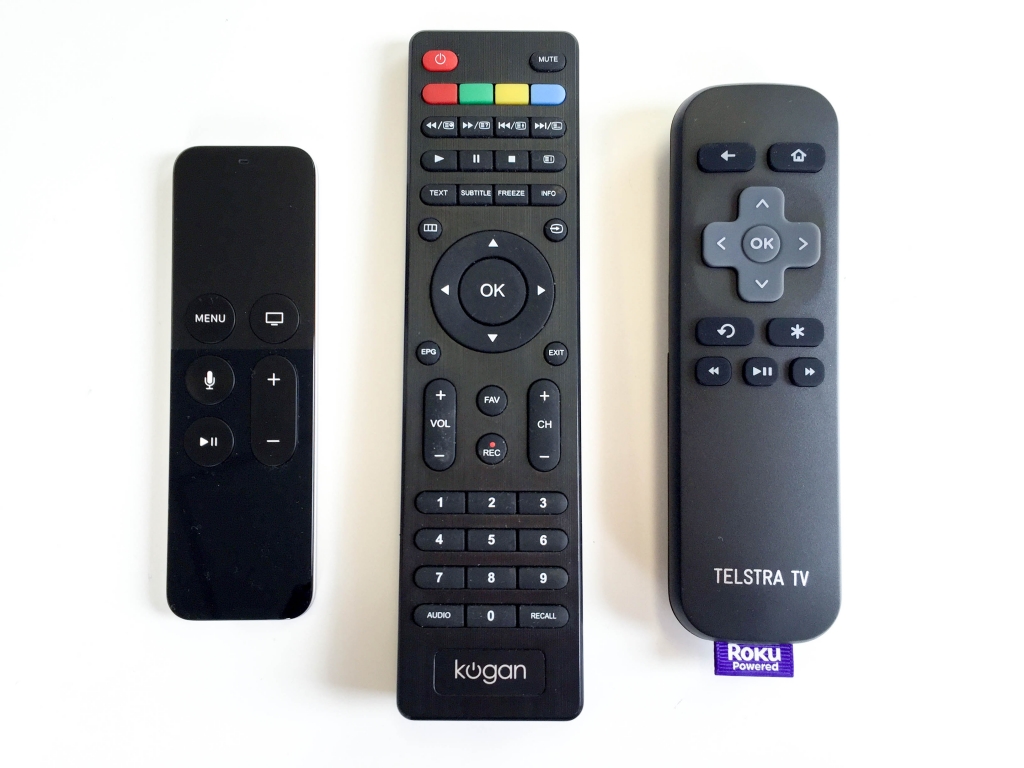 Plugging in and setting up was surprisingly simple. After you connect to the Wifi network, you use a PC or mobile to activate your device and tie it to a Telstra account by entering the code displayed on the TV, saving you the pain of typing in emails and passwords with the onscreen keyboard and remote (never a good experience).

After activating you also get access to $15 credit on Bigpond Movies and 3 month subscription to Presto as a welcoming gift to stream some movies and TV shows for free. 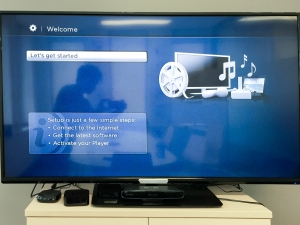 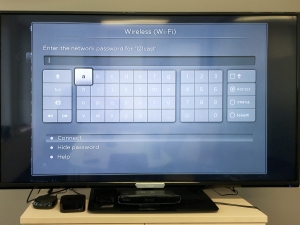 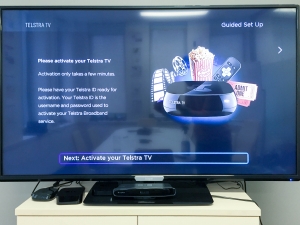 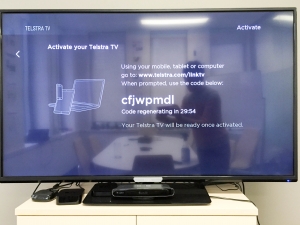 A system update and a few app updates later, it’s all ready to go. From the home screen, you have access to the default apps including Bigpond Movies, Presto, Stan (coming soon), Netflix, Yahoo7, SBS On Demand, Channel 9 Jumpin and more. 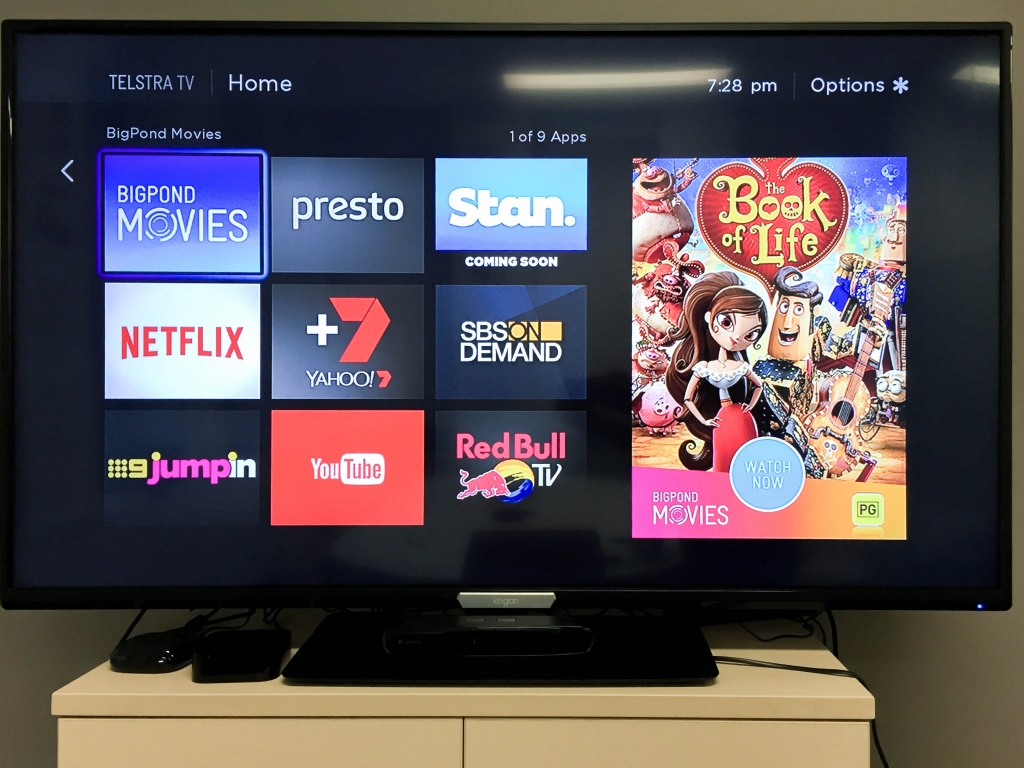 Additional apps can be installed from the “Telstra TV Apps Store”. Unfortunately this is not the US Roku Store which has over 2500 apps and 60 games. At the time of writing, there were only 15 apps in the Telstra TV App Store which included YouTube, the Roku Media Player to access media on a USB device, TuneIn, Wall Street Journal Video, Vimeo, GoPro and etc. Useful third party apps such as Plex are notably missing. Telstra claims more apps will be coming however. 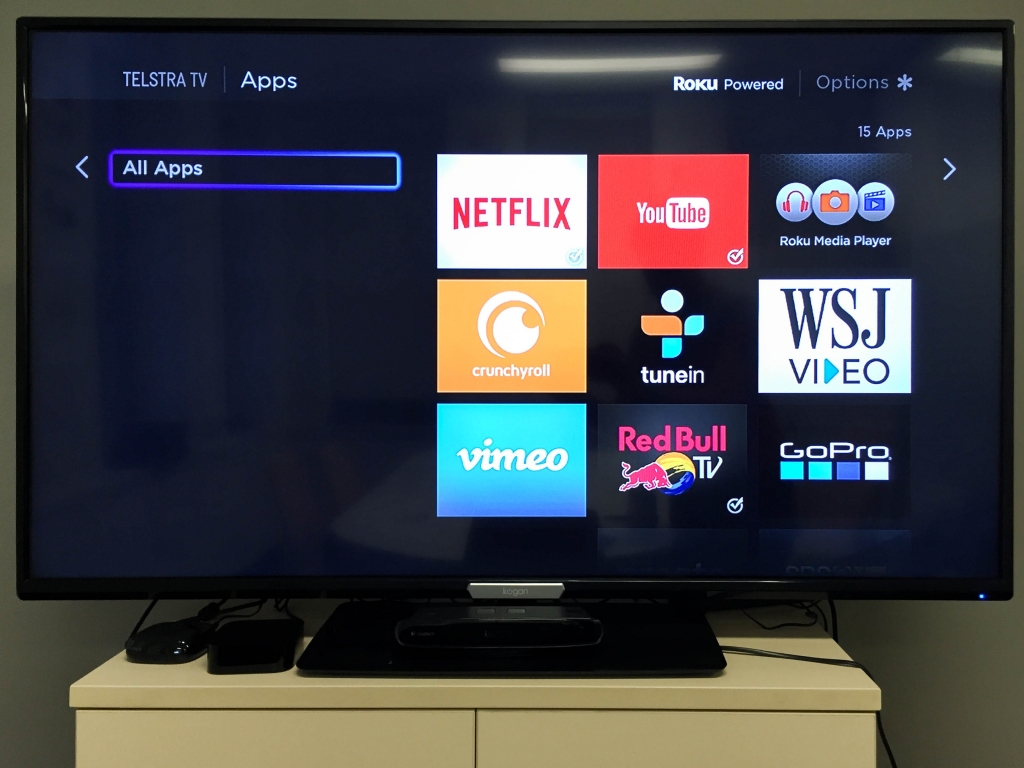 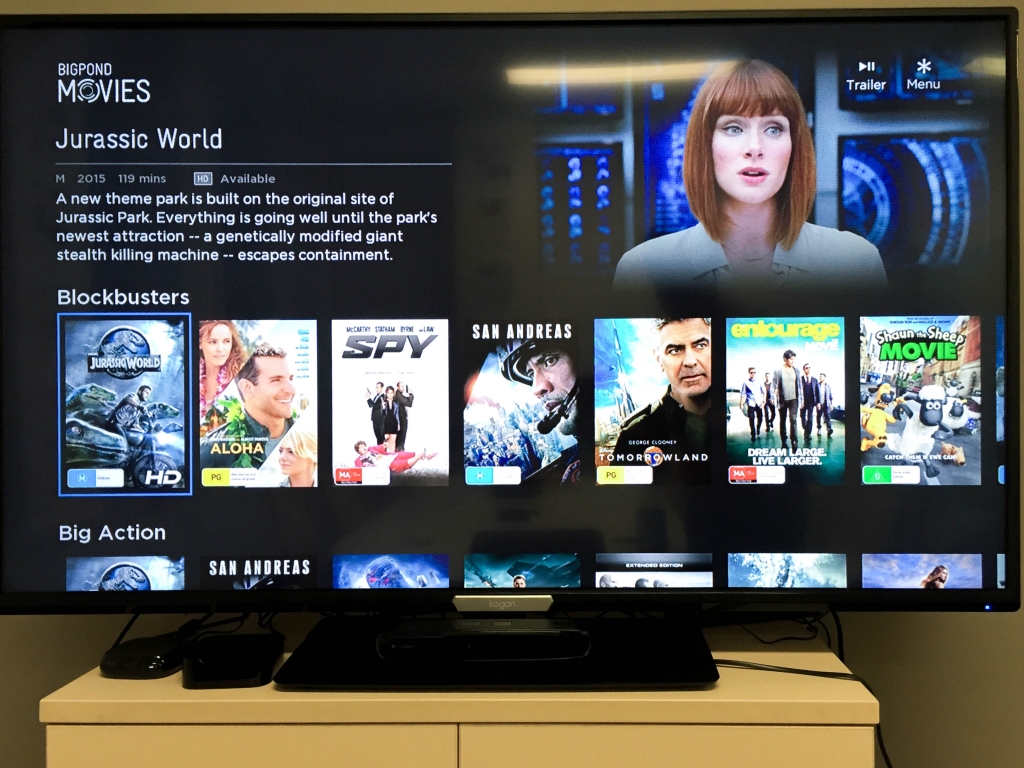 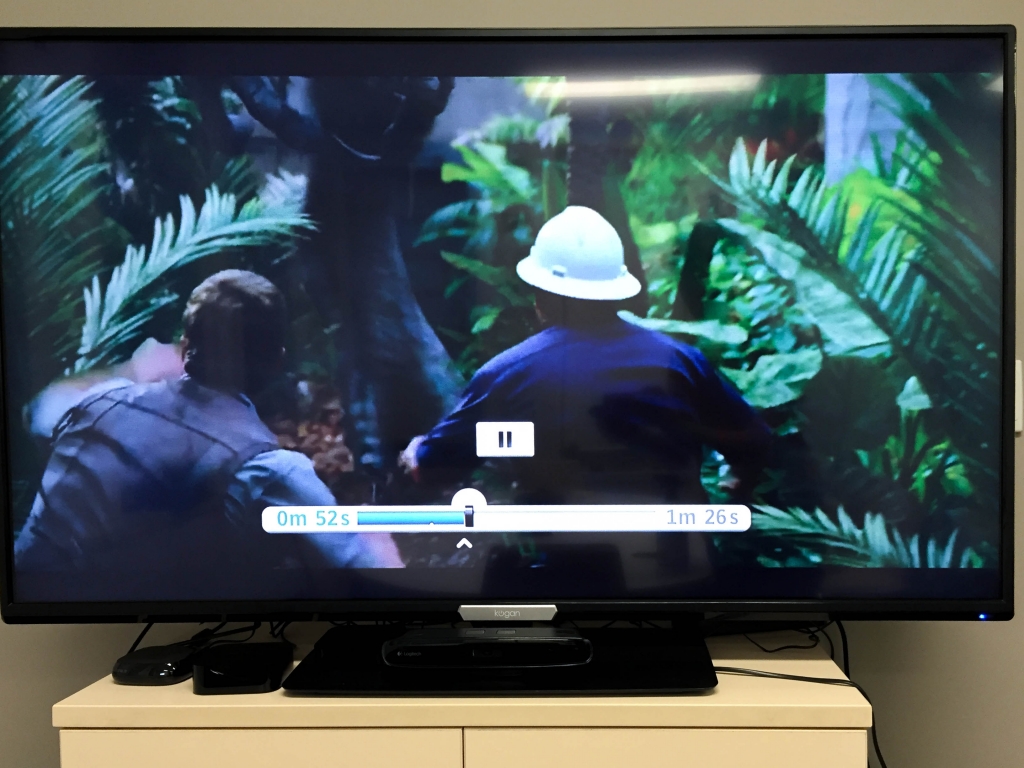 The UI is responsive and straightforward to navigate for a TV experience, but there’s not a lot of depth. Most apps lets you browse featured content on the home-screen, lets you find specific content in a search screen and browse for content by categories or genres.

Streaming video from Netflix and Bigpond Movies only took a few seconds to start but the quality is a bit jarring. Although the Telstra TV supports 1080p, videos from Netflix or Bigpond Movies didn’t look quite 1080p with subtle blocking and colour dithering. (I’m not 100% sure whether this is caused by the streaming services or the device)

In conclusion, Telstra TV gives you a simple and no-frills way to watch Netflix, Bigpond Movies, Presto, SBS On Demand and other popular Aussie streaming services on a TV, nothing too different from what most modern Smart TVs would already offer.

With the new Chromecast and fourth-generation Apple TV on the horizon, Telstra TV is unfortunately a generation or two behind in terms of the apps ecosystem and user experience.

If you’re getting Telstra TV free as part of a new Bigpond bundle contract, then it’s a good enough way to stream movies and TV shows on a TV without apps. But don’t go out of your way to buy one for $109.