Bernard Oh spotted this Microsoft marketing campaign earlier this week for Office 2007. Don’t worry, I can’t get my head around this one too. 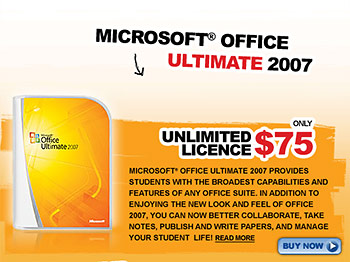 At only $75 Australian dollars (US$59) for an untimed license and $25 for a yearly license, Microsoft has truly lost it. In fact, I’d call them crazy. Why? Not because Microsoft is selling Office for under $100, or Microsoft selling a software on a subscription-model, but because the recommended retail price for Office Ultimate 2007 in Australia is $1,175.00. You don’t even need Excel to know that’s a discount of over $1,100 (94%).

Microsoft probably did this out of desperation because of such the large-scale and growing force of piracy within institutions like universities where high software prices forces students to seek alternatives. In fact only a few days ago, a lecturer at my university hinted at the idea of ‘acquiring software from friends’ which is a totally legitimate argument since universities alone cannot support technology for all of its students. Is this solution, to sell directly to students the most expensive version of Office ever released at a cost so low that it literally cries for attention, going to work?

I think this is a bomb waiting to explode. Why?

Thinking of buying a copy and retiring? Hurry. Offer ends May 28. You will need an eligible university email address and some pocket change. Use Street Team code “MSP9” if you want someone (not me) to win brownie points.

Update: I wonder if this blog post qualifies for the “Golden Blog Awards”. It says winners will be judged on creativity, but I wonder if they accept opinions. I want that mobile phone. 😀