After an awesome tip by Speed who commented on the story I wrote about Jenny leaving Microsoft less than 24 hours ago, it all begins to make sense now like a LOST season’s finale episode. It wasn’t Apple after all, but apples are related. Jenny Lam has officially joined a start-up company in Seattle called the “Jackson Fish Market“. No, she’s not going to be selling fish, although its employees seem to all share a passion for good food.

Jackson Fish is a small software start-up formed in Seattle of November 2006, who its founder Hillel promises to put their “heart and soul into owning and running their own business”. Hillel claims he’s put together a “tight-knit group of folks working hard together to create and deliver fresh hand-crafted products to customers with a personal touch. Products that both address a core customer need, but also make them feel emotionally satisfied, content, and happy.” 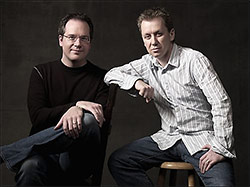 You might be asking, “Who is this Hillel person? And why is his name so damn hard to pronounce?”

Ironically, Hillel Cooperman, who some of you might remember from the early Longhorn development during the hazy-days, was also a Microsoft design director similarly to Tjeerd Hoek (who now has an unofficial fanclub). Hillel is also the infamous presenter for giving one of the most inspiring presentations at PDC 2005, “Getting Users to Fall in Love with Your Software“. He left Microsoft a few years ago do his own thing, and this “Jackson Fish Market” is it.

Apart from working at MSX together, Hillel and Jenny also shared a passion for food and writing about food. Hillel had been writing a food blog called the Tasting Menu for quite some time, gaining quite a bit of traction in the Seattle area if not around the world. This is also where Hillel and Jenny collaborated together for not one, but two cookbooks he was writing at the time.

“The tasks (of creating the book) were divided among Cooperman’s co-conspirators, including his wife and a core group of friends, most of whom work at Microsoft. …A week after the photo shoot, Cooperman had finished writing the text for the book. (Jenny) Lam had laid everything out.” writes the Seattle PI food writer.

The result, are two gorgeous cookbooks published for free by Hillel on his website. Check out “All About Apples” and “Autumn Omakase“. You could see how well they collaborated.

The company has been hiring at least since January this year, one role in particular advertised for software designers who “dream in Photoshop and Illustrator”. Yesterday, that position would have been fulfilled when Hillel announced on the blog that indeed, Jenny Lam was joining his software company as a graphics designer.

We’ve already got a programmer – Walter, and I’m the “sweeper”, so we’ve only got one slot remaining – a designer. Luckily we’ve found not just any designer, but a world class designer and a world class person in Jenny Lam. With the addition of Jenny we now have our three co-founders in place and are excited to make the most of our small team. Everyone please welcome Jenny to Jackson Fish.

There’s not much to be known about what Hillel plans to do, but one of their experimental projects is something called the “Jackson Fish Market Test Kitchen“. A pseudo-alternate-reality-game sort of thing that ties in together some creativity and Chinese culture. It’s sort of cool, but sort of weird.

If I were to bet, not that I’ve ever bet in my life, I’d say they’re going to do some sort of online services software.

Now that we know where’s she’s gone to, it wouldn’t be so hard to track exactly what’s going to be up to. Congratulations to both Hillel and Jenny on their new venture! It’s certainly exciting times ahead.

Does anyone think Jackson Fish Market sounds a bit weird? Maybe like, missing an apostrophe S or something like that?

Update: CNet seems to have a better idea of what Cooperman is up to.

“Brands want to engender happiness and good feeling,” said Hillel Cooperman, founder of Jackson Fish Market, a provider of software and Web services that will enable advertisers to build communities around their brands. Cooperman, formerly with the Windows Vista user experience team, will be working with Microsoft in the future, but he declined to specify further.