Inside the Insiders is (going to be) a series of interviews with some of the most recognized and outspoken Microsoft influentials, journalists and enthusiasts I know. I plan to go around interviewing as many of these peers as possible to find out more about their background, life outside of Microsoft and their darkest Apple fetishes. At least that’s what I tell them. Little did they know their answers will help me annihilate them and my other competitors. They say to keep your friends close, and enemies closer. 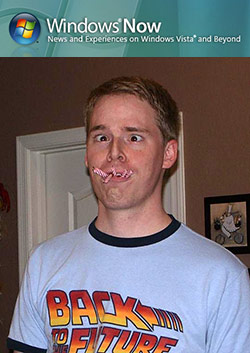 The first of those to fall for my inconspicuous trap is Robert McLaws, from the formerly LonghornBlogs.com fame and now the leader of the Windows-Now clan, consisting mostly of himself. Not only did I have the pleasure of meeting Robert at this year’s CES event in Las Vegas, but also listen to his peaceful snore. What happens in Vegas, makes great jokes later on. Personal details aside, Robert is a great questioner and interviewer himself – always setting the benchmark for heated discussions and topical issues at questions time. Here’s what he had to say from the other side.

Long: Hey Robert. Thanks for falling for my cunning plan.

If you were on a dating site, how would you describe yourself?

My name is Robert Wayne McLaws, and I am a 25 year old guy from Mesa, Arizona. Though I own my own software company, I’m probably the coolest nerd you’ll ever meet.

I’m currently living with Nicole, my wonderful girlfriend of 2 1/2 years. I have a twin sister, two younger biological sisters, 4 step sisters, and two stepbrothers. Three of my siblings are Hispanic, one is gay, and I have 4 black step-cousins.

The modern American family 😉 (And I already have the rights to the sitcom, so don’t even try it.)

So what did you study in college or university?

I actually never went to college. And everything I know about computers has been self-taught.

I didn’t want to go just because “that’s what you do after high school.” Most of my peers stumbled their way through college and came out on the other side with a piece of paper certifying their competence as worker drones. I wanted to go on my own time, when I could dedicate the time to broadening my horizons in areas that interest me, like psychology. But the tech industry provides a relatively unique opportunity in this day in age to move ahead based on experience, not education.

But I did miss out on some of the college experiences that would have been nice to be a part of. Some days my lack of higher education is a painful hindrance, but I stand by my decision. Someday I’ll go back when I feel the time is right.

What was the first time you came across computers? And why were you interested in computing technologies?

I first started working with computers in the first or second grade (1988, for those of you keeping track). My classroom had an Apple IIc, and I loved playing games like Number Munchers and Oregon Trail. I often finished my work before the rest of the class, so when I was done, I got to play on the computer. One day, when the teacher wasn’t looking, I popped the top off, and had a look around. I was amazed that it didn’t seem to be much more than a three-dimensional puzzle. So I took it apart. Then my teacher caught me, and got pretty pissed off. Fortunately, I got out of trouble when I put it back together again.

After that, I started taking an interest in programming. In our whole school library, there was only one programming book, for BASIC. So I used it to build simple programs, like a program to help quiz students on word definitions. After that, I learned QBasic, and then WordBasic. When I was in 10th grade (1997) I built an application to manage the Logistics department at my Air Force Junior ROTC unit. At the time, my goal was to build a business to sell the software to the Air Force. That’s how my company (Interscape Technologies) was born.

To be honest with you, I wasn’t well liked as a kid. I could never understand why kids reacted the way they did. I liked computers because they couldn’t make fun of me, or put me down. Little did I know they could still make me feel stupid, but every time it misbehaved there was a logical explanation, it just needed to be found. There is a thrill in that pursuit that I still love to this day.

What was the first time you used a Microsoft product? Was it pirated?

First time I ever used a Microsoft product was a game written in QBasic on MS-DOS 5.0. Ever since then, I’ve been a Microsoft guy. And no, it wasn’t pirated. But a lot of my software as a kid was… Windows 95, 98, and 2000 specifically. In fact, Windows ME was the first OS I ever purchased for myself. And I’m probably the only person on the planet that loved ME and never had a problem. After that I decided that I should stay legit.

Long: I don’t know anyone wouldn’t love themselves. Seriously.

I can’t remember my first interaction with Microsoft… that was a long time ago. It was probably working with the ASP.NET team on the forums. It was really cool how they were always around to answer questions and help people understand their stuff.

Would you call yourself a Microsoft fanboy?

The term “fanboy” gets a bad rap, but I’ll say yes, I am. I mean, everyone knows that I gave up on drinking the Kool-aid, and started snorting it in powder form. But for me it’s not about individual technologies, it’s about mindset of the company.

Apple is in business for themselves. They could give a damn about building a rich ecosystem of other companies, all they care about is having total domination over their products. Practically since Day 1, Microsoft has wanted to enable others to take advantage of their success. Even a 12 year old kid could build on a Microsoft product and add value to customers, and that’s an amazing thing to me.

I think you’d be hard-pressed to find any other company on the planet that cares for their partners as much as Microsoft. And that’s why I love the company.

How did you start blogging? Why do you continue to blog?

Well, I used to troll the ASP.NET Forums back in the day when ASP.Net was just getting started. I’d answer a lot of newbie questions and what-not, because I was a newbie too. When Scott Watermasysk started DotNetWeblogs.com, I signed up as a way to create my own personal “knowledge base”. If I encounter an issue I know that I’ve written about, I just Google “Robert McLaws _______”, and is usually pull it up right away. That was the real value I got from blogging, and still do.

But I started talking more about my opinion after being egged on by other bloggers, notably Robert Scoble. I started LonghornBlogs because Scoble said there should be a place to talk only about Longhorn, as his readers were tired of hearing about it. A couple weeks later, Jim Allchin featured it in his PDC ’03 keynote. After that, I knew what I wanted to do.

It makes you watch what you say a bit more. When you’re a little guy on a blog, no one gives a damn what you think. But as you build credibility, you have to choose your words a lot more carefully, if you want to keep that credibility. It’s a lesson I’m constantly re-learning, though…. That’s probably not a good thing.

I always get a kick out of hearing who reads my stuff. My kid sister works at a McDonalds in central Colorado. One day, a guy came in for lunch, and saw my sister’s name badge. He asked “is your brother’s name Robert?” to which my sister, totally stunned, replied “How much does he owe you?” The guy said “No, I read his website all the time.” I never stop being amazed at stuff like that. I found out that my graph tracking Vista feedback was used in an executive briefing once, so it’s nice knowing that at least someone derives value out of some of the things that come out of my mouth.

What was the most interesting or exciting time during your interactions with Microsoft?

My favorite memory is when I got to meet Bill Gates at CES this past year. I’ve wanted to meet him ever since I took apart my first computer. Now, all of the other Featured Communities were there too, so it’s not like Bill knew me from Adam. But I was one of the few that got to shake his hand, and that was cool. Maybe someday I’ll get a one-on-one with him after he retires.

If you came across some information which might critically damage Microsoft’s reputation or financial value, would you still write about it?

Probably not. I don’t write about things like new Vista cracks, because those things damage Microsoft’s bottom line. I don’t post screenshots when I don’t have official confirmation, because sometimes Microsoft hasn’t finished protecting their intellectual property yet.

I mean, look at what happened with Apple and Engadget the other day. Engadget is arguably an Apple fanboy site, and their posting rumors as fact cost Apple’s shareholders a ton of money. That probably ruined Engadget’s relationship with Apple, and I guarantee Microsoft will think twice before giving them another Bill Gates interview.

So I’m conscious of the fact that what I have to say carries weight, and I’d rather be right than first. Of course I’ve made mistakes, but I like being able to sit back and read a situation, and then present a thoughtful commentary that takes into account the bigger picture. Rather than chasing the latest news.

Do you ever want to work for Microsoft?

I would love to work for Microsoft, but I would want to have as much influence on the inside as I have on the outside.

As a beta tester, I get to see my feedback have an effect on the products I test. As a blogger, I can defend Microsoft when I feel it’s warranted, or call them out on a bad decision when it’s also warranted. I’d want to be able to have that kind of power on the inside.

I think it would be fun to work for Greg Sullivan’s team – he’s a great guy, and I’d get to talk about a product that I love all the time. There are definitely things that I would like to do if I was marketing Windows.

Do you think you will ever stop writing about Microsoft? What will they have to screw up to lose your interest?

Only if they went out of business. Look, IBM lost their dominance, but they’re still around. As long as Microsoft is always doing new and interesting things, they’ll still need people to write about them. And unless they try to rob me or something, I’ll probably still be doing it.

Thanks Robert for sharing with me all your trade secrets, I mean wonderful stories.

Thanks for letting me be your first victim?