Inside the Insiders is a series of interviews with some of the most recognized and outspoken Microsoft influentials, journalists and enthusiasts I know. I plan to go around interviewing as many of these peers as possible to find out more about their background, life outside of Microsoft and their darkest Apple fetishes. At least that’s what I tell them. Little did they know their answers will help me annihilate them and my other competitors. So far my plan is working, and no one suspects a thing. 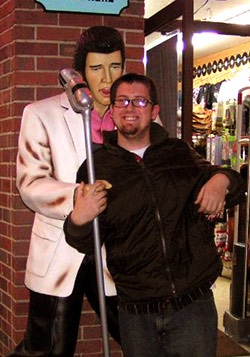 Brandon LeBlanc (right). Clay model (left).
Or so he tells me.

This time, I chat with Brandon LeBlanc who has a gift for multi-tasking. He used to blog for himself at MSTechToday as the Sidebar Geek (he’s very fluent in Sidebar I might add), which later implode, forcing him to blog on Live Spaces instead – a bold move. More recently, he joined Microsoft’s official Windows Vista Team Blog, writing for The Windows Experience blog – creating a-blog-in-a-blog paradox. If that wasn’t enough, he’s also Twitters. This interview would be considered counter-productive because he’s only responding to 1 question at a time.

Hey Brandon, sorry to take a bit of your “Halo 2 on Vista” time. Don’t worry, Master Chief will still be there when you get back.

No worries. I’m getting my ass handed to me on a silver platter. I’m finding that I’m not really good at Halo 2. But I see myself as more of a source of amusement for the other players.

Long: You can count that towards community service.

Who are you? And how do I know you’re not really a 65-year old sitting behind a computer?

I am Brandon LeBlanc, 23, from Oregon. I am a blogger who blogs about Windows who loves movies and can’t get enough Dr. Pepper. Oh and I am a piss poor gamer.

You met me at CES so you know I’m not at 65 years old. However I do sit behind a computer a lot. 😉

Long: But you could have had a very clever disguise. Wonders what those anti-aging creams can do these days.

So you work for the evil empire right? How did you score that role? You’ve done a bit of stuff with Microsoft in the past? 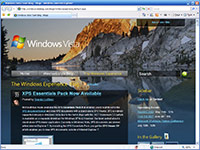 I serve as a vendor working on a project with Microsoft. I don’t officially work for the company, I’m hired as a independent contractor pretty much to work on a specific project. In this case, my project is the Windows Experience Blog. For the past year I’ve been doing work as a vendor with Microsoft on variety of things such as content for The Hive and help with the Windows Vista Launch in January. I don’t really recall how I scored the role.

Long: They must have done a pretty good job wiping your memory.

What do you do every day? Do you drive to Redmond? Do you eat as much snacks as the machines can pop out?

I drive to Redmond every couple weeks. It’s about a 3 1/2 hour drive. Not a bad drive either. I bring my Zune and all my wonderful music, put it on shuffle and enjoy the ride. I don’t eat much of the snacks at Microsoft but I do drink tons of Dr. Pepper! What I do pretty much every day is read lots and lots of RSS feeds to see what folks are saying in the community as well as experimenting with different scenarios in Windows Vista to blog about. For me, all my blogging revolves around what I am experiencing in Windows Vista and what others are experiencing.

Do you think you’re living the “Scoble legacy”? If not, who do you aspire to?

I am not living in the “Scoble legacy” because my blogging is defined by my experiences with Microsoft technology. Scoble has a much broader direction and his blogging even while he was at Microsoft covered a much broader range of topics. I’m more focused on Windows specifically. I wouldn’t want to follow in his legacy as I want my own legacy!

Why do you blog? How many blogs have you had? What gets you going? How did you start blogging?

I started blogging in 2005. I was really excited for the new Microsoft technologies coming down the pipeline and needed a way to vent that excitement. I used to do my blog by hand using FrontPage 2003. I did all my graphics and everything. Then WordPress came along and helped me see the light.

I blog because I feel I have important things to say and want to share that with folks who are interested. I feel my experiences are worth blogging about and hoping in turn generate excitement on my readers end on some of the cool things that you can do.

I’ve always had MSTechToday as my personal blog site. It has currently moved over to Windows Live Spaces due to a WordPress crash I had a few months ago and don’t have the time to fiddle around rebuilding the site. I’ve lost about 95% of my traffic I once had but hey, it’s all good. I used to blog for Robert McLaws at LonghornBlogs (before Windows-Now). I helped the LiveSide guys out for a few months. And of course I’ve blogged at The Hive.

I am extremely grateful for the blogging experiences I’ve had at each site. Robert is a awesome friend and Chris, Harrison and Kip are awesome too. I wouldn’t trade my experiences at those sites for anything. It helped me be a better blogger. Now I’ve got only 2 blogs: MSTechToday (at Windows Live Spaces) and the Windows Experience Blog.

Why Microsoft? Why not Apple or some other less-evil company?

I’ve been excited and following Microsoft since the Windows 95 Beta (previously I was pretty good with Windows 3.1). I was 11 years old beta testing Windows 95 on my dad’s old HP Vectra cause he didn’t have time to test it. I remember following IE4 pretty closely and so on. I used to tell my dad I wanted to work at Microsoft someday. He would use that as a tactic for me getting the best grades. If I got a bad grade, he would always say “you’ll never work at Microsoft with those kind of grades” and I’d always improve them.

Are you a Microsoft fanboy?

What did you study in college/university? If not, how did you gain the knowledge you have about computers?

I studied Business Management. I was doing a minor in Computer Information Technology (not sure if that minor exists anymore). I was staying away from a full-on Computer Science degree mainly because I suck at math.

My dad worked for Hewlett Packard and started one of our town’s first ISPs right out of our garage with some friends in 1994 so I was always exposed to technology. He would bring home systems and I’d play with them. He worked a lot so I always played and taught myself but my dad was always good at encouraging me to learn. And he was good at answering my questions. I gained my knowledge about computers by doing.

Long: Every kid should grow up running an ISP.

What are your first memories of Windows?

My first memories of Windows is fiddling with Program Manager and having to use a command prompt to log on to the internet. Something like “atdt” and the phone number.

What did you want to be when you were younger, besides rich and famous.

When I was really young I wanted to be a Ghostbuster. But then I transitioned into wanting to be Batman. At Batman was also rich – and famous 😉

What part of technology excites you the most? The gadgets? The acronyms? Or the bean-bags?

I avoid bean bags simply because for some reason I always break them. What excites me the most about technology is you are always learning something new. Everything is always in flux. There is always room for improvement in software (products and services) and companies like Microsoft are always improving on releases. They release Office 2003 then you move on to looking forward to Office 2007 etc. It’s very exciting. Every day I learn something new and I like that. Technology also connects people (such as email and IM). That’s exciting.

Would you ever want to work for Google or Apple?

No. Their stuff doesn’t excite me much. And I like being excited about the work I do. You have to be excited about your job. I mean, it is certainly possible that Google or Apple could grab my excitement so I shouldn’t say “no” or never. But if I weren’t doing stuff with computers and technology I’d be writing and producing my own movies. I’ve always had a hidden passion to make movies. I can even begin to describe to you how many “Making of…” books I own of movies.

What have you got in store for the near and foreseeable future? What are your goals?

Lots of blogging about Windows experiences. My goal is to become a excellent resource in the community for experiences you can have with Windows. I also want to go back to school. I am also finding interest in marketing stuff too. And I want to find time to maybe produce a movie and put it on Soapbox. That would be cool. I’ve got some friends who are interested in putting something in production. We’ll see.

Thanks Brandon. Prepare for your annihilation, I mean, talk to you soon.

I’d rather be assimilated instead of annihilated.