Inside the Insiders is a series of interviews with some of the most recognized and outspoken Microsoft influentials, journalists and enthusiasts I know. I plan to go around interviewing as many of these peers as possible to find out more about their background, life outside of Microsoft and their darkest Unix fetishes. At least that’s what I tell them. Little did they know their answers will help me annihilate them and my other competitors. 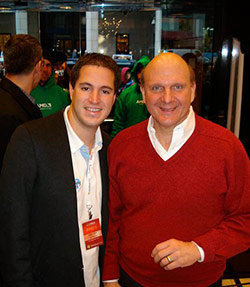 Bob insists he is the dude on the left and not the ball of fun in the red vest.

Before the spew of silly little blogs like this one, most people visited one of the bigger technology websites or portals for their source of information and gossip. For Microsoft news, one of those that withstood the test of time is ActiveWin. One of it’s co-founders is Robert Stein, or otherwise simply known as Bob. I also happened to meet Bob during CES and there’s no better way to describe him than just a great down-to-earth guy. But as it turns out, he’s not as down-to-earth as I thought he was. In fact, you could say he’s above-and-all-over-the-earth.

Hey Robert. Who are you and what website do you run?

I am Bob Stein, of Pittsburgh, PA USA, the co-founder and Editor of ActiveWin.com.

Movies: Big, Shawshank Redemption – I like most horror movies as well.
Books: 1984, Animal Farm
Foods: Sushi, Italian, just about anything
Hobbies: Travel – I love to travel and will go anywhere. My favorite places are India and Turkey, but I’ve been all over including Russia, England, Romania, etc. When I am not traveling, I like to go boating, cooking, snow skiing, swimming, etc. and just relax (without computers nearby).

School: BS, Penn State University and MBA University of Pittsburgh
Something hardly knows about me: I started my online career at AOL as a forum leader when I was just 13. Of course I did not tell them my age. And, I love to sky dive! If anyone wants to go skydiving let me know!

ActiveWin.com has a (relatively) long history! First, I met my co-founder Byron Hinson through a common friend who worked for MSN UK. I also worked for MSN US as a “forum manager” for the Virtual Dog Racing forum, UK Chat forum and Virtual Airlines forum. Virtual Airlines was focused around Microsoft Flight Simulator, which is how I got involved in Microsoft products. This was way back in 1995!

When MSN decided to move all their forums to the newly found web, I finally met my good friend Byron through the Director of MSN UK. He converted my forums to the web for me, but after they all went away we decided to start a website called ActiveIE, based on the newly released Internet Explorer 4.0. We started this in 1997 – the same year as Google – when domain names cost $100 per year to register and simple website hosting was several hundred per month.

ActiveIE was really popular with all the desktop features and plug-ins that were available with IE. So after that, we naturally decided to migrate to a Windows based version – ActiveWindows. We officially opened our doors on June 25, 1998. Here is our first day of news here: http://www.activewin.com/news/1998/june.shtml

Our original name was ActiveWindows which we later had to change because the Windows ME Beta Coordinator decided to get Microsoft to sue us for trademark infringement. However, we settled with Microsoft and made our name officially “ActiveWin.com” and that is how you see it today. Some additional sites that did and didn’t work: ActiveLinux, ActiveXbox, ActiveMac, ActiveHardware, ActiveDVD, and so on and so forth. I am sure I am missing some things – but you get the jist.

Wow, that beta coordinator might explain why Windows ME was so buggy. How did you piss him or her off? 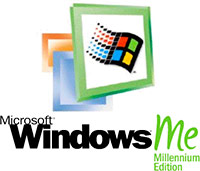 Well, we didn’t get sued. Just threatened. However, the Windows ME Beta Coordinator in those days wished to remain anonymous – under the alias Skeeter. I think at some point we must have irritated her by exposing her identity or posting some screenshots (in those days – people didn’t post as many screenshots of every build), so she had the Microsoft legal team scour our sites for things wrong.

One of the things was the name “ActiveWindows” and our corresponding logo, which they said was infringing on their trademark because of the “Windows” and the full Windows logo we used, which we were. Microsoft made us a nice offer, purchased the domain name off us, etc. and the whole thing turned out pretty amicable. So in the end everything was good, that helped the site along nicely and I like “ActiveWin” better anyway. 🙂

How do you manage ActiveWin? How do you get as many posts published as you do? How many RSS feeds do you read? How much time do you spend per day on ActiveWin?

Managing ActiveWin is tremendously hard. As of today, since 2001 we have posted 39,981 news articles! There is no way I could personally do it without the help of so many people over the years who have posted news and written reviews, etc. Before our automated system, we had to post all our stories by hand – what a mess! The easiest way to explain why ActiveWin works is the dedication of the staff throughout the years who have helped make it work, along with the great community that has stuck with us all this time.

How has ActiveWin grown over the years? When was your biggest growth, how did it take off? How many visitors do you have currently?

ActiveWin.com was growing pretty strong those first few years. But our real growth came when we exposed the leak of Whistler to the web in 2000, via longtime friend Mary Jo Foley:
http://news.zdnet.com/2100-9595_22-519359.html

As of today we have 80,463 registered members and we get several million impressions a month. Our traffic is pretty steady, but grows a lot right around the Windows releases!

Back in the heydays, how many other news aggregation sites were there? And how many are there now?

There wasn’t that many – BetaNews, IEGallery, Win98Central, etc. There are a ton now! It definitely makes the competition much tougher.

Why do you think ActiveWin is still kicking, even in such an over-populated market? How do you think blogging has affected ActiveWin?

ActiveWin has tens of thousands of pages of published content over the past 10 years. We’ve attracted the attention of the highest in the industry and we’ve broke a lot of news. We’re the oldest and I think still one of the best and that’s why we continue to stick around.

What will happen to ActiveWin in the near and distant future? How’s that long-coming redesign progressing along? When will we see that go live?

ActiveWin is underway of a radical change. We have moved to a new much more powerful server and I can finally say with great enthusiasm and certainty we have a new site under way, led by a well-respected and knowledgeable community member who has gone out of the way to ensure we have a long lasting future.

Besides ActiveWin, what else have you been up to?

Hmmm, there is life outside of ActiveWin? In my other real life job, I am an IT Consultant for the University of Pittsburgh – I work with the enterprise wide problems that occur occasionally in the IT world, like Great Plain failures, etc. I am also a Windows Server MVP for four years now!

How did you get into the Microsoft news scene? What makes such a monolithic company interesting to you?

Microsoft may be large but that’s why we are in existence. There is so much to cover we can be posting 24 hours a day, 7 days a week and we’d still find new stuff to post. In addition, Microsoft is very innovative so it keeps things interesting.

How many Microsoft events have you attended so far?

If you could take any role within Microsoft, what would you do and why?

I’ve met a lot of people and have seen many jobs in action. I think Larry Hryb (Director of Xbox Live Programming) had the most fun and interesting job – he got to play Xbox games all day long. But really, I’d like Steve Ballmer’s job. To direct the company on the high strategic level would be very fulfilling, because Steve sees the results of his efforts all the time.